Deep 98 commenced on Sunday afternoon at New Pier Hall in Tokyo. There were plenty of finishes but Daichi Abe saved the best until last, taking out Yuta Watanabe in the welterweight headliner.

From the onset, Abe was light on his feet and very crisp with his boxing. The former UFC welterweight was very accurate with his combinations while Watanabe struggled to find his range.

The jab found a constant landing spot on Watanabe’s left eye, eventually opening a cut on the eyelid that bled profusely. This put a stop to the action twice during the first round. 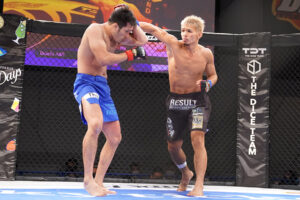 After the second break to have the doctor come in and clean the cut Abe was full of confidence. They engaged and a right uppercut left hook combination folded Watanabe to the floor.

A few more hammerfists and the ref jumped to put a halt to the fight. It was a second straight win for Abe who improves to 8-4 while Watanabe drops to 22-11-4. 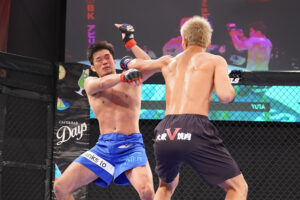 Heading into the co-main event, Tatsuya Mizuno was looking to continue his career resurgence and extend his win streak. However Joao Batista Yoshimura had different plans and marched forward right from the start.

Whenever Mizuno threw any type of combination, the Brazilian would counter with looping shots that had tremendous power behind them. The kicks to the front leg accumulated damage and by the end of the opening frame the Japanese veteran’s lower leg was purple and blue.

Continually eating kicks limited the movement of Mizuno which allowed Yoshimura to walk him down easily. The Brazilian staggered his foe with a left hook and rushed in, landing another left hand.

With Mizuno stuck against the fence, an endless amount of punches followed and the fight was swiftly over. Yoshimura earns his fourth straight knockout in a row and elevates his record to 6-4 while Mizuno snaps his eight-fight winning streak and drops to 22-13-1.