Adriano Moraes has enlisted the help of some elite training partners as he prepares to face off against Demetrious Johnson next month. He has been working with two fighters who between them have 24 flyweight fights in the UFC.

â€œBecause DJ is so good at fighting, you need to have a really good strategy. So, Katel Kubis is doing a lot of good strategy with me. Conan Silveira gave his thoughts, of course, and Mike Brown is one of the best coaches in the world. Plus, I have a bunch of other guys like Kyoji Horiguchi and Jussier Formiga,â€ he said.

Horiguchi and Formiga are experienced flyweights, although the former has been competing at 135lbs since he signed with Rizin. Moraes hopes training with them will give him an edge as he prepares for the biggest fight of his career.

He also takes confidence from Johnsonâ€™s performance against Danny Kingad. Moraes submitted him in the opening round in 2014 but the Filipino went the distance with the former UFC flyweight champion,

â€œDJ has beaten tough guys, but when I fought Danny Kingad, I submitted him in the first round. DJ almost submitted him, but he couldnâ€™t,â€ he said. 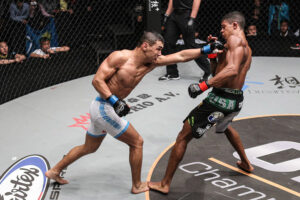 However he does have plenty of praise for the man widely regarded as being the best flyweight in MMA history,

â€œHis transitions are really good, his grappling is awesome, his strength is good, his conditioning is high level, heâ€™s smart. He does everything and it looks easy,â€ he said.

But Moraes believe he brings something to the table which is â€˜differentâ€™. Â The Brazilian also feels he will have a speed advantage against Johnson,

â€œI donâ€™t think Iâ€™m the best in the world, but I think Iâ€™m different. I do the transitions and Iâ€™m faster too. I always try to do everything correctly. I train hard every single day I go to the gym.â€

The fight has been in the works for well over a year and has been postponed a couple of times because of Covid-19. Moraes has had his sights set on â€˜DJâ€™ ever since the American was included in a sensational swap deal for Ben Askren.

In face Moraes says he wanted Johnson to win the flyweight Grand Prix so the two could finally face off,

â€œI was cheering for him to win the Grand Prix. You know his story, he was one of the best champions in one of the most famous organizations in the world.â€

The UFC was close to scrapping the flyweight division after Johnsonâ€™s departure. There have only been three 125lbs title fights since he signed for ONE Championship in 2018.

So Moraes is entitled to feel this is the biggest fight that any promotion could make at flyweight,

â€œFor me, this is the best fight in the flyweight division in the world today,â€ he said.

While Johnsonâ€™s journey from being a humble construction worker in Seattle to becoming the UFC flyweight champion is well documented Moraes has his own path. He was an orphan on the streets of Brasilia and wants people to pay attention to his story,

â€œOf course, people are going to put me as the underdog, but I donâ€™t care. Everyone has their own story, and I just keep creating mine.â€

There is no question that Moraes is currently the best flyweight in ONE Championship history. But he is clearly outranked by Johnson who can justifiably claim to be the greatest 125lber of all time.

Moraes wants to keep his belt. But he also wants to snatch away Johnsonâ€™s legendary status and is determined to become just the fourth man to beat the flyweight legend,

â€œDJ has everything already, and heâ€™s trying to cross my way. Heâ€™s gonna pay, thatâ€™s it.â€