This year has not exactly gone according to plan for most people. Danny Kingad is definitely one of them, the #2 ranked flyweight contender has been unable to compete since January.

He saw a bout with Kairat Akhmetov nixed by a positive Covid-19 test for one of his cornermen Â and the 25 year old says the entire experience had been â€˜exhaustingâ€™,

â€œ2020 was a really peculiar year. There were a lot of restrictions imposed at the start of the pandemic. Weâ€™ve never really experienced anything like that before. It was difficult to adjust to training. As a normal person, it was very difficult coping with so much uncertainty. Mentally, it has been very exhausting,â€ he said.

Several of his team mates have got fights in since the start of the pandemic and Kingad feels comfortable with the current routine,

â€œWeâ€™ve been able to adjust to the â€˜new normalâ€™ since then, and weâ€™ve since gotten back to training. Iâ€™m looking forward to a better year next year.â€ 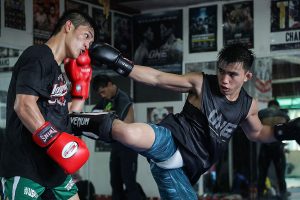 Kingad fought for the ONE Championship flyweight title in 2017. He was submitted by current champion Adriano Morales but went on to win seven of his next eight fights with the sole loss coming at the hands of Demetrious Johnson.

Moraes and Johnson will finally face off in February and Kingad wants a rematch with the winner,

â€œI have only one goal on my mind, and thatâ€™s making a run at ONE gold. I want to bring honour and glory to the Philippines. I know thereâ€™s a big matchup soon between Demetrious Johnson and Adriano Moraes. I would love to fight the winner of that fight some time in the near future.â€

However he acknowledged that one more win might be required to secure that title shot,

â€œIâ€™m looking to earn another long-awaited shot at the title. I think Iâ€™m ready, Iâ€™m one big win away from getting to the top,â€ he said.

There was a big win for #3 ranked Akhmetov at ONE: â€˜Collision Courseâ€™ Part II last week. It might be enough for the Kazakh fighter to leapfrog Kingad in the flyweight rankings and a fight between the two seems an obvious option for the ONE Championship matchmakers.

Kingad will be hoping he doesnâ€™t have to wait too long to find out who he will be fighting next. But whatever happens he says he has learned valuable lessons from a frustrating year,

â€œThe biggest lesson I learned this year had to do with time management. Suddenly, we had all this free time on our hands, and there was definitely an adjustment period. Before, we would spend entire days training at the gym. Now, weâ€™re spending more time at home, which has its advantages and disadvantages.â€

For the time being Moraes and Johnson are definitely on his mind. They are the o my fighters to have beaten Kingad and he is desperate for an opportunity to avenge those losses,

â€œI believe Iâ€™ve changed a lot since facing either of them and they will be surprised.â€