Davit Kiria stops Enriko Kehl in the opening round

Davit Kiria made a big statement in the opening round of the featherweight Grand Prix. The Georgian was up first, taking on Enriko Kehl in an all European quarter final clash.

He needed less than three minutes to finish the German scoring his final knockdown right on the bell:

Davit Kiria ???????? punches his ticket to the World Grand Prix semifinals with a STATEMENT KNOCKOUT in Round 1 ???? #ONEFirstStrike #WeAreONE #ONEChampionship pic.twitter.com/YQiyrugjpo

Speaking after the fight Kiria said,

“I feel great. Hello to everyone who called me underdog! I am very emotional because I won today, I promised to bring one of the best fights and I brought it I think.”

Surprisingly some fans thought the former Glory lightweight champion and Kunlun Max tournament winner was not the favourite to win the fight. He was coming off a loss to Giorgio Petrosyan but was far too good for Kehl and no-one will be underestimating Kiria again after this performance. 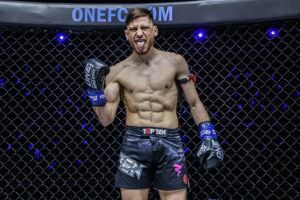 Enriko Kehl has the mindset of a champion