Superbon Banchamek accused Giorgio Petrosyan of ducking him when the featherweight Grand Prix winner turned down an opportunity to fight him at short notice. The message clearly reached the kickboxing legend who does not sound at all happy,

“Every fighter out there wants to fight against me and ,of course, if they receive short notice of 20 days, they want to fight because they have nothing to lose. With less than a month’s notice, they offered me Superbon, that’s why I rejected the offer, only because of bad timing. If I was afraid of him, I wouldn’t have accepted this fight.”

The two will meet at ONE: ‘First Strike’ on Friday in Singapore. Petrosyan sounds upset but claims that Superbon’s taunts have had no effect on him,

“It doesn’t bother me at all. I don’t care, and I let them run their mouths and speak as much as they want. Everyone knows that inside the ring, there’s no need to talk,” he said. 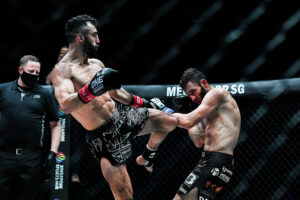 While he wasn’t happy to hear the Thai accuse him of ducking Petrosyan does have plenty of respect for Superbon,

“He is a super tough opponent. Everyone knows that he is very good with his legs. His technique is amazing. He has really good timing and is a well-rounded fighter,” he said.

He also warned the Thai that trying to throw him off his game by engaging in some pre fight slanging would not work,

“I just need to keep the focus on what I have to do. I think my boxing skills are better. But if you don’t show it inside the ring, it doesn’t mean anything. Let’s see.” Petrosyan knows what it takes to win a ONE Championship featherweight kickboxing tournament. He won in 2019 and has the opportunity to challenge for the actual title at the Singapore Indoor Stadium this Friday.

Another featherweight tournament gets underway this week and he thinks it is an impressive line up,

“It is an extremely tough tournament. I know all the fighters involved. Right now, honestly, I cannot predict who is going to win, but, for sure, the best will win at the end,” he said.

The newly crowned champion could end up making their first defence against the Grand Prix winner Having won K-1 Max twice he knows a thing or two about tournaments and Petrosyan is excited by the talent on display,

“ONE has signed all the best athletes in the division. This is something that ignites me. But right now, I am only thinking about my next opponent. I am thinking about the world title and about delivering a great performance.”

Petrosyan declined the opportunity to send a message to Petrosyan and says he prefers to do his talking in the ring,

“When I step into the ring, I don’t joke around. I don’t need to put on a show. I only care about hitting hard and bringing home the belt.”