Deep 95 is still scheduled for the Korakuen Hall on May 6th. Three more fights were announced this week but the promotion also warned fans that the card could be postponed.

Among the latest batch of fights released on the Deep Facebook page is a bantamweight bout pitting Michihiro Omigawa against Daiki Hata:

Hata (20-13-7) is a former bantamweight champion with the promotion and is coming off a win at Deep 93. The 37 year old will be in the unfamiliar position of being the younger man in this bout.

Also added to the Deep 95 card this week was a lightweight bout pitting Luiz Andrade (21-19-6) against Ryota Oki (2-0). The latter made his promotional debut at Deep 92 last year while the former has been fighting for the promotion since 2005.

The other fight added to the card is a bantamweight bout between Takashi Takano (1-2) and Chihaya Yoneyama (9-1-1). As previously announced Satoshi Yamasu puts his featherweight title on the line against Juntaro Ushiku in the main event.

Deep-Jewels 29 will be taking place in the same venue on the same day. That card will feature a microweight tournament final pitting Suwanan Boonsorn against Mizuki Furuse. 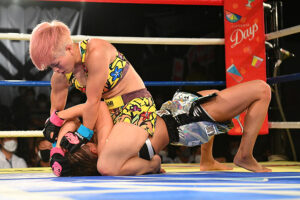