Suwanan Boonsorn is looking to finish 2019 in style as she takes on Japanese veteran Miyuu Yamamoto at Rizin 20 on New Years Eve.

This will be Boonsorn’s fourth fight in Japan as she looked to climb the rankings and finish a busy year with a win. In her last fight the Thai faced a big test against reigning super atomweight champion Ayaka Hamasaki, losing by armbar in the opening round.

Hamasaki is regarded by many as being the best pound for pound female fighter in the world. But Boonsorn feels that under different circumstances she could have got the win at Rizin 19,

“I went into that fight with a few injuries, that stopped me from training fully for the fight, she is also very experienced, but I feel that if I could have prepared better I could have beaten her.” 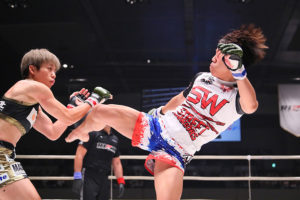 Since that loss Boonsorn has kept very busy. She stopped Yoon Ha Hong at Deep-Jewels 26 in Japan and then went on to represent Thailand at the Jiu-Jitsu World Championships in Abu Dhabi in November and the SEA Games in Manila earlier this month.

Boonsorn claimed two gold medals at the former and a bronze at the latter and is not happy with that haul and feels she should have done better,

“I really wanted the gold medal, but there was very little time to prepare for the tournament after the World Championships in Abu Dhabi. Again I had some injuries that didn’t help either. I wanted the gold, but I am still happy to have come away with the bronze medal at my first SEA Games and know I could have done better with a little more time to prepare”.

After coming back to Thailand she was named best female jiu-jitsu fighter at the annual Sports Authority of Thailand awards. It’s been a busy few months but now the focus is purely on Yamamoto. 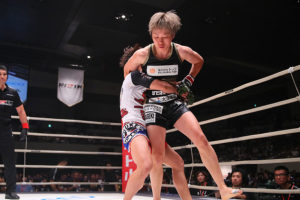 Boonsorn and her team have studied her opponent and have a strategy in mind,

“We have watched a few of her fights already and know she comes from a strong wrestling background. We will work mainly on trying to keep the fight standing and trying to avoid her shooting in for takedowns. She has a few submission losses before too, by armbar and guillotine choke, so if the fight goes to the ground I am confident in my jiu-jitsu.”

Boonsorn holds a first round armbar win over Thailand’s first ever UFC fighter, Loma Lookboonmee. Seeing her former opponent get to shine on MMA’s biggest stage has inspired her to keep working hard but right now she is in need of a break,

“I want to keep performing well and reach as high as I can in the sport and become well known worldwide but the last few months have been very hectic with constantly training and fighting. Once this fight is out of the way I want to take a little time off and rest and do nothing, maybe just a month to help my body heal and then I am ready to take on whoever is put in front of me.”