Denice Zamboanga has trained extensively with Stamp Fairtex and was promised a fight with Angela Lee. She has had plenty of opportunity to observe and study both atomweights and knows exactly how their fight will finish.

Stamp challenges Lee for her atomweight title in the main event of ONE: ‘X’ and Zamboanga can only see the fight ending one way,

“Stamp is my friend, and I believe in her. She has been training for this for so long. I know she can get this. Stamp will get the belt (by) TKO.”

It is a bold prediction but Zamboanga says she has a lot of respect for both fighters,

“Both are great athletes. Angela is the champ. She has been there for so long, and she is a well-rounded fighter. She can strike and grapple.”

But while Lee has been sitting on the sidelines for over two years Stamp won the ONE Championship atomweight Grand Prix. Having won the tournament Zamboanga thinks her friend is ready to seize the belt from the only fighter to have ever worn it,

“Stamp is the Grand Prix winner. She fought and grappled against great athletes. She is ready to get the belt.” 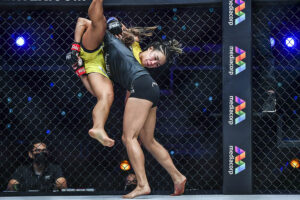 Zamboanga was promised a shot against Lee but the champion’s pregnancy put paid to that. Instead she entered the Grand Prix and was controversially eliminated by Seo Hee Ham.

The two will run it back at ONE: ‘X’ on Saturday. The winner could be in line for a title shot although Itsuki Hirata, who pulled out of the Grand Prix due to illness, is also in the mix.

Zamboanga still dreams of winning the title and is willing to face anyone, even Stamp, in order to do it,

“I’m willing to fight anyone. I have been here just waiting for my turn.”