Duane van Helvoirt has worked tirelessly throughout his professional career to earn the type of opportunity that arises this Sunday. The Dutchman will challenge Yutaka Saito for the featherweight championship in the main event of Shooto 0329.

The event is set for the Korakuen Hall in Tokyo and the 34 year old does not need reminding of what is at stake,

“This is my big opportunity to show people who I am and what I am capable of, and introduce myself to the whole world,” he said.

“I am very proud they are giving me this chance. Surely, I will do my best.”

Having won against two of the Japanese MMA scene’s biggest names, it was a no-brainer that Van Helvoirt should be next in line for a shot at Saito’s belt.

“I’m very happy with the way how my career has unfolded. I have come a long way. I’m very happy with all the victories I’ve achieved. They’re the product of the hard work I’ve been putting in for years. I was able to demonstrate that I’m at a high level in my last fight,” he stated. 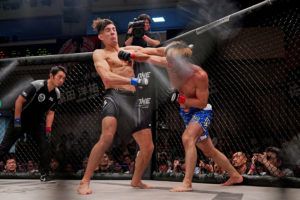 The last recorded title bout on Van Helvoirt’s résumé was when he fought future PFL veteran Max Coga for the featherweight strap under the Respect FC umbrella in September 2013. Unfortunately, he fell short in his bid, bowing to the German standout via unanimous decision.

Van Helvoirt has his sights set on redemption at Shooto 0329, and he will not settle for anything less than capturing the black-and-red-laced strap at the expense of Saito.

“Everything has prepared me to face my opponent for the championship belt. I believe it’s my destiny to be a champion. I’ll give everything I have to make that happen on fight night. Everything has worked out as expected. I can’t wait,” he expressed.

He will enter enemy territory for the third time and having already fought successfully for Shooto twice he knows what to expect,

“I’ve always dealt with pressure throughout my career. I’m used to it. I try not to think too far ahead. I’m working hard to be ready for this bout and win,” Van Helvoirt shared. 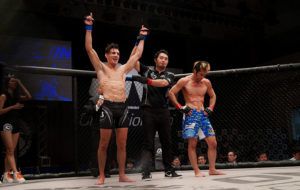 Van Helvoirt holds his Japanese foe in high regard and knows he won’t be in for an easy night on Sunday,

“I respect him as a fighter. He is one of the best fighters in my weight class and in Japan. I expect a very difficult fight. But if all goes well, I expect to win,” he said.

Saito has been the division’s kingpin for four years. But Van Helvoirt is relishing the chance to come in as an underdog and cause an upset,

“It’s going to be a great fight. The Japanese people will definitely support him, but it’s fine with me. It just gives me enough reason to be motivated and get the victory,” he stressed.