After a prolonged break from competitive action Eduard Folayang is excited be be starting again. The Filipino is returning to the stadium where In many ways it all began.

He started his ONE Championship career at the Singapore Indoor Stadium. The Filipino beat A Sol Kwon by decision in the headline fight of the promotion’s inaugural event in 2011.

Folayang had his nose badly broken and had to come from behind to win that bout. He has made a career out of overcoming adversity and returns to the Singapore Indoor Stadium on Friday to face Antonio Caruso.

Questions over Folayang’s longevity are lingering but the 36 year old sees this as a new start, 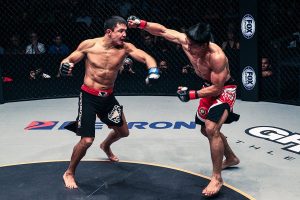 At one stage Team Lakay fighters held the strawweight, flyweight, bantamweight and lightweight titles with ONE Championship. Joshua Pacio is the only surviving champion from those glory days.

It was an impossible standard for a single team to set, let alone sustain. But Folayang says he and his training partners are determined to reclaim some of the lost silverware,

“I can say the results of these next few fights are very important to us, as we haven’t gotten the results we wanted recently. So now, we are really aiming for the best results possible,” he said.

Folayang and his opponent are both coming off decision losses to Pieter Buist. The Filipino is facing a younger man but says he will not be short or motivation at ONE: ‘Inside the Matrix’,

“I have high expectations for him. He’s called ‘The Spartan’ for a reason, and that’s because he’s a warrior. He’s hungry, so I have to show that I am hungrier,” Folayang said.

The Australian is a submission specialist and Folayang is well aware of what his opponent brings to the table,

“Looking at his technical strengths, he can win via submission, so he’s confident on the ground. But at the same time, he’s more than willing to brawl as well. He comes forward and gives a lot of pressure.”

A brawl would suit Folayang who has been entertaining ONE Championship fans with these type of fights since 2011. But it remains to be seen whether Caruso will be willing to engage,

“He can also adjust, evident in his previous match against Buist. If he doesn’t get his rhythm on the feet, he always has a plan b which is his takedowns. So, I have to be mindful of that.”

Folayang was seconds away from finishing Eddie Alvarez last year. A moment of misjudgment probably cost him the fight and he is determined not to make any tactical errors on Friday,

“Of course we want to get that win. We want to do it by executing our game plan from start to finish, imposing my will, and being 100% accurate with what I want to do,” he said. 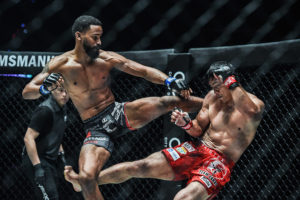 While a few people have been suggesting Folayang might retire soon his recent results have been solid. He is not coming off a long losing streak and appears to have retained his speed and stamina.

Folayang does not sound like a man contemplating retirement. He sees Friday’s fight as being a start rather than an end,

“I believe this is a brand new chapter in our long journey, and as always, it starts with Singapore.”