Edward Kelly‘s fight on Friday will be his 16th for ONE Championship. The Filipino has been on the roster since 2013 and has seven wins and eight losses.

At ONE: ‘Full Blast’ he faces Ahmed Faress. Kelly has never lost more than two fights in a row but a loss this week would put him in exactly that situation.

It is a situation the 37 year old is determined to avoid,

“A win here would be huge for me. It would further add to my desire to return among the ranks of the best fighters in the featherweight division and it starts with Ahmed.” 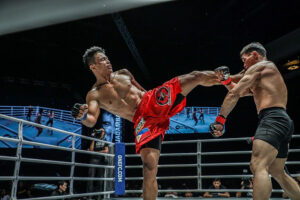 He is coming off back to back decision losses to Kai Tang and Xie Bin. Kelly thinks he was a little but unfortunate with the scoring in the last one,

“This is a very big match for me because I’m coming off a decision loss, a very close one. That’s why I regret that loss. I was that close to getting the win.”

Kelly has not always been with Team Lakay. Like his brother, Eric Kelly, he bounced around between various training camps and training partners.

But he is now a part of Mark Sangiao’s team and has been training alongside the likes of Eduard Folayang, Kevin Belingon and Geje Eustaquio,

“I really worked double-time on my ground game. I know that’s where I’m lacking and that’s what I need to improve on. It also just so happened that Ahmed is a very strong ground fighter so it all fits,” he said. 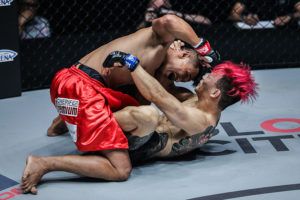 While Kelly has been looking to improve his submission skills he still sees himself as a fighter with the classic Team Lakay style. That means spinning kicks, a sideways stance, looping punches and raw aggression with Kelly likely to bring all these elements to ONE: ‘Full Blast’,

“My main advantage has to be Team Lakay’s bread and butter in striking.”

His career is coming towards its end. He is the same age as Folayang who has faced questions about his longevity after a three fight losing skid.

Kelly knows that the only way to silence these sort of awkward questions is by winning fights and that is exacttly what he wants to do this week,