Fahdi Khaled knows what it’s like to face an elite level Thai fighter. He dropped a decision to Rodtang Jitmuangnon at ONE: ‘Hero’s Ascent’ last year and faces a similar sort of challenge on Friday.

At ONE: ‘A New Breed’ Part II he faces Superlek Kiatmoo9. His style might be slightly different from Rodtang’s but the Thai brings with him a stellar reputation from the Bangkok stadiums.

Khaled hails from Tunisia and says patriotic pride will be at stake at the Impact Arena,

“I’m really happy that I’m with ONE Championship. I give my gratitude to ONE, as I’ve been given the chance to prove myself and to represent Tunisians, Arabs, and all Muslims around the world.” 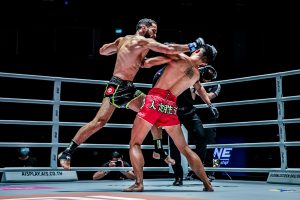 Khaled is clearly outranked by his opponent in Muay Thai terms. But this will be a kickboxing contest and the Tunisian says he is not intimidated by his opponent’s reputation or credentials,

“Superlek is one of the best in Thailand. He’s well-known and he’s got something with his left leg, it’s strong. His punch is really strong too.”

Khaled feels he will have an advantage over the experienced Thai in terms of speed,

“I’ve watched a lot of Superlek’s matches (and) I should be faster in the match. There’s nothing to be afraid of.” He had to wait over a year for his second fight for the promotion. But Khaled put in a dominant display against Huang Ding at ONE: ‘No Surrender’ Part II last month.

He faces a big step up against Superlek but Khaled says he wants to test himself against the biggest names on the roster,

“I’m happy to be against him in a match. It’s going to be such a war. This is really a challenge for me, so I have to be stronger, physically and mentally (but) Superlek doesn’t scare me.”