Ernesto Montilla needs no introduction to fans of the mixed martial arts scene in the Philippines. He has been one of the most exciting flyweights to watch for the last seven years.

His aggressive striking approach and no-frills wrestling techniques put fans on the edge of their seats and Montilla has only gone the distance twice in his ten career victories so far.

Possessing a 10-4 record, the 27-year-old is the reigning URCC flyweight champion. But while several of his compatriots are making their name on the global stage, opportunity has yet to knock for Montilla,

“It’s frustrating. I know for a fact that I am ripe to compete against the best that the MMA world can offer. I’ve fought athletes who are high level and I’ve managed to exceed expectations because of my hard work and dedication. As you see, I’m still at this level,” he said in his native tongue. The closest that Montilla has ever gotten to foreign exposure was when he competed in the now-defunct Pacific Xtreme Combat, a regional MMA organization that held events in both Guam and the Philippines from 2004 to 2017. During that spell he scored wins over Jenel Lausa and the late Ale Cali.

Montilla also vied for the vacant PXC flyweight championship in a losing effort against Alvin Cacdac in November 2014. Three years later he returned to the local circuit in 2017, scoring four straight submission victories to capture the URCC flyweight title.

Montilla put that strap on the line against Team Lakay’s Edilberto Coquia Jr. at URCC 77 in April, keeping the belt around his waist with a unanimous decision win.

He was supposed to make his second title defense against Shomidin Maksudinov at URCC: ‘Retribution’ in November but the event was cancelled at the last minute. Montilla revealed that he was in the middle of training camp when he learned the postponement of his scheduled bout,

“I prepared really hard for my title defense because my goal was to achieve a statement win in that fight. Unfortunately, they had to cancel it. At first, I didn’t believe the news. When I got the confirmation, I can’t help but feel depressed,” he said. To compound his misery, the URCC top brass has not given Montilla a definite date for his return to action,

“They have yet to notify me when the next fight will take place. But I am willing to suit up anytime. I will fight whoever they put in front of me,” Montilla said.

As he waits for URCC’s call, Montilla disclosed that he has been receiving offers from smaller leagues to strut his wares. But he has his sights set on a contract with either the UFC or ONE Championship,

“I am still training regularly. I didn’t stop. I want to make sure whenever I get the call, I am ready to jump in there with no questions asked. I am also praying for bigger opportunities,” he said.

Whether the new year brings a URCC title defence or a contract offer from a bigger promotion remains to be seen. But Montilla is content to bide his time and believes that sooner or later his opportunity will arrive,

“I think 2020 is the year when my dreams will come true. Whether it’s the UFC or ONE Championship, I will take it. If not, it’s fine. I know it will come.” 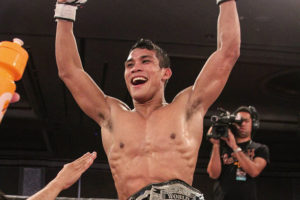