Floyd Mayweather and Liam Harrison are set to face off in London. The two men will meet at the O2 Arena on February 25th in an exhibition boxing match.

Mayweather will not just be fighting on this card, he will also be promoting it. The event is being put on by The Money Team and it will be the legendary boxer’s first time competing on British soil.

While Harrison doesn’t have any boxing matches listed on his official record he does have some experience of competing in the sweet science in Thailand and Cambodia. The English fighter is better known for his exploits as a Muay Thai fighter although he is currently recovering from knee surgery.

By contrast Mayweather has been the most successful boxer of the century. He retired from the sport with a perfect 50-0 record but has continued competing in exhibition matches.

Mayweather has basically been on a retirement tour. Four out of his five exhibition matches have taken place in Asia with two of them on Rizin cards at the Saitama Super Arena.

In 2019 the multiple time boxing world champion stopped Tenshin Nasukawa in the opening round. Last year he returned to Rizin to stop Mikuru Asakura in the second stanza.

He has also fought twice in the Middle East, competing in both Abu Dhabi and Dubai. Mayweather has never competed on British soil before but is no stranger to English fans having fought Ricky Hatton in 2007.

During his last Muay Thai bout Harrison suffered a serious knee injury. He was on the receiving end of some devastating low kicks from Nong-O Gaiyanghadao.

It means he won’t be able to throw any kicks himself for a while but apparently the Englishman can still box. While Harrison might be lacking in boxing experience he is one of the most entertaining fighters around and you cannot question his heart.

He was knocked down twice by Muangthai PKSaenchaigym but picked himself up off the canvass to finish the fight with three first round knockdowns of his own. Harrison earned $100,000 USD in bonuses from ONE Championship for that performance and will be looking at an even bigger pay day when he faces one of the most famous fighters on the planet in an exhibition boxing match next month. 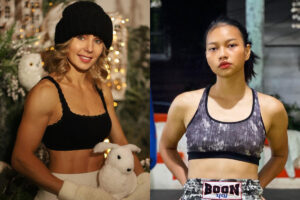