Eric Kelly out to resurrect career at ONE: ‘Roots of Honor’

Eric Kelly fought on ONE Championship’s inaugural event in 2011, picking up a bonus for ‘submission of the night’. He was one of the promotion’s first Filipino stars, alongside compatriot and occasional team mate Eduard Folayang.

But while Folayang has gone from strength to strength in recent years Kelly has faded. He’s lost his last five bouts and hasn’t registered a win since 2015.

It’s a losing streak the 36 year old is determined to end at ONE: ‘Roots of Honor’ on Friday night. Kelly knows that he needs a victory to resurrect his career,

“I feel like it is an important match for me because it may have my combat career on the line,” he said. 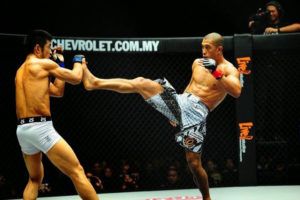 The Filipino was originally scheduled to face Teng Kai. But the Chinese featherweight pulled out and has been replaced by Korean Won Il Kwon.

But Kelly has been fighting for ONE Championship for nearly eight years and says a change of opponent isn’t going to adversely affect him.

“I will head over to the match prepared to the best of my abilities, and I should be prepared against whatever kind of fighter steps up in the cage,” he said.

Kelly was the first fighter to win a $50,000 performance bonus from ONE Championship, earning the money on the back of a come from behind submission win over Rob Lisita in 2014,

He also challenged for the inaugural featherweight belt in 2013 and Kelly’s name will go down in ONE Championship history. However he is not ready to accept that his glory days are destined to remain in the past. 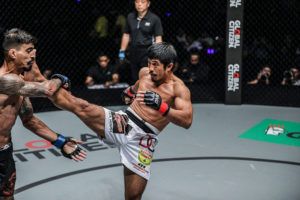 Kelly still feels he can compete with the top featherweights on the roster and feels his experience will be key at the MOA Arena on Friday night,

“Having been a martial artist for almost 20 years, I have a wealth of knowledge in the cage that I can use to my advantage. The experiences that I have in life, will equip me with the strength to overcome this latest challenge,” he said.

The Filipino is known as ‘The Natural’. Perhaps it all came a little too easily to Kelly in the days when he was riding an undefeated streak that saw him capture the URCC featherweight title and win his first three ONE Championship fights.

However he says this natural aptitude gives him confidence going into this make or break bout,

“I pride myself with being a natural martial artist and I think that’s why I stay confident. I’m preparing well, doing my usual routines (and) I feel like I have more focus now as a fighter,” he said. 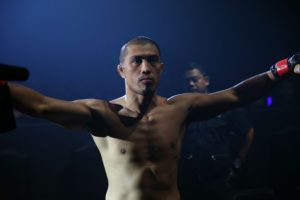 Good to be back

Kelly hasn’t fought in just over a year. It represents a long absence from competitive action for the veteran but he never thought abut walking away from the sport,

“I’m really happy to be back because this is what I really want to do,” he said.

The featherweight division has moved on since Kelly challenged for the inaugural title. The rules have changed and so has the roster with more recent arrivals like Martin Nguyen competing alongside seasoned veterans like Jadambaa Narantungalag.

Jadambaa challenges Nguyen for his featherweight title in the main event of ONE: ‘Roots of Honor’. Edward Kelly is also on the card and the two siblings will both be hoping for a successful  night.

For the former title challenger it is an ideal opportunity to remind the division that one of its early pioneers can still be a force to be reckoned with,

“I’m still here. You’ll see an even better Eric Kelly than you’ve seen before when I step back in the cage.”