From champion boxer to humble farmer: Pedro Taduran on life during lockdown

Since the beginning of the coronavirus, or Covid-19, pandemic, Pedro Taduran has found tranquility on his farm in Libon, Albay. Each morning the IBF strawweight champion rises at 5am to begin tending to the one hectare (2.5 acres) rice farm which he operates with his father, Pedro Sr.

They will work in the muggy Philippine heat until 10am before breaking to eat, then come back in the afternoon to finish up the day’s work. It’s a life the 23-year-old has known since he was a child, growing up as one of ten children who were supported by his father’s work as a rice farmer.

At age 9 he picked up the sport of boxing after learning how to punch from his older brother Joseph, and went on to have around 100 amateur fights before turning pro at age 18. It takes about three months to harvest a crop, and Taduran can sense any day now it’ll be time to reap the fruit of their labor.

“Maybe there will be 50 sacks of rice for me, and 100 for my father,” Taduran jokes about how the crops will be divided.

“I am also enjoying farming, but I still miss fighting,” he adds. Taduran (14-2-1, 11 knockouts) had been finding his stride in his career last September, when he pulled a minor upset in Manila, rising up from a first round knockdown to stop the previously unbeaten Samuel Salva to win a world title. The second try was really the charm, as he had lost a competitive decision to Wanheng Menayothin a year prior in Thailand in his first attempt at a world title.

This past February, Taduran traveled to Guadalupe, Mexico for his first title defense, meeting mandatory challenger Daniel Valladares in his hometown. The fight was an all-action thriller for as long as it lasted.

The fight was stopped in the fourth round due to a cut on Valladares’ face that was caused by an accidental headbutt. One judge scored the bout for Valladares while the other two had it even at 38-38.

Taduran had hoped to settle that score or, in the absence of a direct rematch, head back to Thailand for a shot at the country’s other undefeated 105-pound champion, Knockout CPFreshmart.

But with boxing in the Philippines on hold due to the pandemic, and embassies either closed or working reduced schedules, Taduran isn’t sure when he’ll next be in the ring.

Sean Gibbons, president of MP Promotions, which handles Taduran’s career, says that part of the problem is there is little demand for fighters in the sport’s lightest division.

“The problem is it’s the 105-pound division. There are no people calling for that weight,” said Gibbons.

“So the other way to do fights like that is against another Filipino and get someone to sponsor it, or, once travel problems are lifted, we’d like to do the rematch with Valladares.” 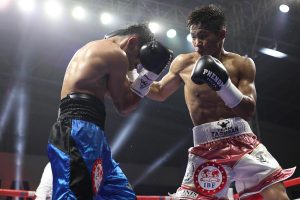 Taduran isn’t the only Filipino fighter stuck in limbo. IBF junior bantamweight titleholder Jerwin Ancajas had been planning to head to the United States in March to make the ninth defense of his title when his flight – and fight – were canceled, leaving him to bide his time on his compound in Imus, Cavite.

WBO bantamweight titleholder John Riel Casimero of Ormoc City, Leyte has been in Las Vegas since the pandemic began, and was deep in training for an April 25th unification fight against Naoya Inoue. But that fight, and virtually every other bout, was canceled in the pandemic’s wake, and with Inoue stuck in Japan unable to obtain a visa, there’s no telling when that fight can finally happen.

The Filipino fighters who haven’t allowed the pandemic to slow them down are the ones based in Miami, under trainer Osmiri “Moro” Fernandez. The fighters, who are members of the Sanman Boxing stable of General Santos City, had been on standby waiting for a date.

Mike Plania, the once-beaten bantamweight contender, cashed in his opportunity in a big way on June 16th, dropping #1 ranked WBO bantamweight contender Joshua Greer twice en route to a massive upset victory on a Top Rank card in Las Vegas. His gym mate Mark Bernaldez will attempt to pull off a similar feat this Thursday, when he faces unbeaten prospect Albert Bell on another ESPN televized card.

Undefeated Filipino featherweight Mark Magsayo tells AsianMMA.com that he’s headed for Los Angeles on Wednesday, and will begin training with Freddie Roach at the Wild Card Gym as he awaits a fight date of his own. 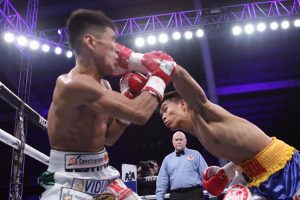 For now, Taduran stays ready on his farm. There are no gyms open to train at in his home province, and he’s many hours’ distance away from the Hardstone Boxing Gym of his manager Art Monis and head trainer Tacy Macalos in Valenzuela City.

The open road to jog on and a crude punching bag is the equipment he has to work with as he awaits the green light to ply his chosen profession once more.