ONE Hero Series 4 is set for Beijing on April 22nd and the full fight card is out. As normal it consists entirely of Chinese fighters with a couple of experienced mixed martial artists in action.

Makeshate Sailike (7-4) is coming off a quickfire stoppage win at OHS 1. The welterweight takes on Wurigenbayar (4-2) who will be competing under the ONE Championship banner for the first time.

The ONE Championship strawweight title changed hands on Friday and two Chinese fighters will have the opportunity to establish their credentials in this division. Li Zhe (4-0-1) will be hoping to register a third OHS win against WLF veteran Ze Ru (7-2).

Wang Jian Ping (3-4) fought for ONE Championship back in 2017. He was submitted by Christian Lee and will go in search of a first win since 2016 when he faces Wang Jing Jia (6-8) in a bantamweight contest. 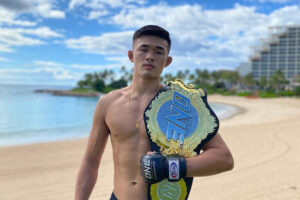