Geje Eustaquio says he has improved since second Moraes fight

Friday night will be a pivotal moment in the career of Geje Eustaquio. With a flyweight Grand Prix just getting underway a loss would leave him almost completely out of the title picture, while a win could set up the biggest fight of his career.

Demetrious Johnson will have to beat three separate fighters, starting with Yuya Wakamatsu at ONE: ‘A New Era’, to earn a shot at the belt but the former UFC flyweight champion is odds on to do just that. The title is currently Eustaquio’s property but he faces a real challenge to keep it this year.

The first obstacle arrives at ONE: ‘Hero’s Ascent’ in the shape of Adriano Moraes. For Eustaquio he is a familiar foe. They have fought twice, and with a win apiece in the previous meetings this will be a winner takes all rubber match. The stakes are high and Eustaquio is willing to do whatever it takes to defend the belt in Manila,

“I had to give up Christmas celebrations for this fight. I missed a lot of family activities such as birthdays and reunions. Spending time away from friends and family to train isn’t easy. It’s part of being a professional martial artist. A lot of sacrifices have been made (and) training in December was one of them.”

Eustaquio is the promotion’s unofficial rematch king. Every time he has been handed an opportunity to avenge a loss the 29 year old has taken it and he doesn’t believe this is a coincidence,

“The first time I fought Adriano was a learning experience for me. I knew going into the (re)match that it would be one of the biggest challenges of my career. That’s why I am the champion today, because I learned my lesson. That’s the secret to my victory in the rematch.”

He also won rematches against Anatpong Bunrad and Kairat Akhmetov, and Eustaquio believes the five losses he has suffered all served to strengthen him in one way or another,

“I learned a lot from my previous wars, and that brought me to victory.” While Moraes submitted Eustaquio in their first fight the rematch was much closer. The Filipino prevailed by way of split decision and thinks he succeeded in surprising the former champion with some tactical tweaks,

“I was able to execute my game plan properly and defend his grappling effectively. I was also able to score some takedowns of my own, which I know surprised and confused him.”

Having already spent over 30 minutes inside the cage with Moraes you wouldn’t think Eustaquio has any more surprises in store for the Brazilian this Friday. But the champion believes he has improved significantly since their last fight and has a few new tricks up his sleeve,

“I have fought Adriano twice (so) for me, the pressure is not about winning or losing (but) about getting better. I am ready to show the world my development and the new things I learned in the span of six months (and) Adriano is hungry, he will bring something new to the table in our third fight.” 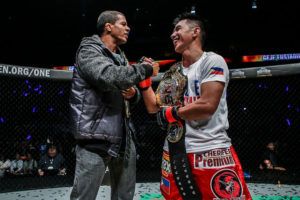 The stakes are high, Eustaquio knows that. But all he can do is make sure he is in peak physical condition by the time the bell sounds at the MOA Arena and he is confident that will be the case,

“I am treating this bout as the most significant of my time as a professional mixed martial artist, but because of my hard work and preparation, all that is left is to give the performance of a lifetime.”

Eustaquio has never faced the same opponent three times before. But ONE Championship‘s rematch king is ready to repeat history by beating Moraes and booking a title defence against the winner of the flyweight Grand Prix.