With Covid-19 restrictions easing in Japan a large crowd turned out at the Edion Arena in Osaka to watch the latest K-1 World Grand Prix show.

This was the second fight between them with Anpo scoring a stoppage victory via high kick, in the 4th extension round of their match on K-1 Lightweight World’s Strongest Tournament at the same venue back in December 2018.

Both started moving in and out, looking to find their range in the opening round, with Anpo switching back and forth between orthodox and southpaw. Yamazaki came in with a fast one two, connecting hard with the straight right and started to look more aggressive. Anpo came in with an explosive long knee from the southpaw stance, but Yamazaki opened up with a heavy barrage of punches, finished by a clubbing right to the back of Anpo’s head, dropping him for an eight count.

Anpo beat the count and tried to land with a jumping knee but Yamazaki looked determined to finish the job. Anpo tried to fight his way out of trouble with some strong punches but this left him a little open defensively.

Yamasaki connected with a huge left hook that snapped Anpo’s head back and send him crashing to the canvas where he was counted out, a little under two minutes into the opening round. The co-main event was a battle between two rising stars, with Yuki Egawa taking on Tatsuya Tsubakihara. Egawa came into the fight on the back of a decisive showing to win the K-1 World Grand Prix <57.5kg tournament.

Egawa won all three tournament fights inside the opening round at that event last November and started this bout a solid favourite. He started with his trademark, swarming, pressure style, pushing forward and looking to attack Tsubakihara to the head and body with hard punches.

Tsubakihara showed slick footwork and movement though to move off of Egawa’s attacks and fired back with sharp punches of his own.

Egawa kept pushing forward, but Tsubakihara circled to his left and right and using a sharp jab to control things, picked off Egawa with punches and kicks as he moved in.

Tsubakihara landed an explosive long knee, but Egawa showed he was dangerous with a solid counter punch. Near the end of the round Egawa landed with a hard straight right, his best shot of the round, but Tsubakihara just shrugged it off. 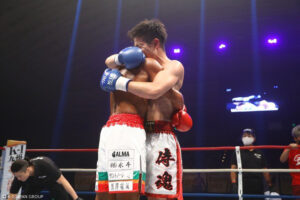 Round two saw more of the same with Egawa pushing forward and Tsubakihara circling off his attacks. Egawa started to look a little unsure of what to do as he kept missing with his shots and Tsubakihara kept landing with sharp counters.

Tsubakihara landed with a fast long knee mid round. Egawa kept pushing forward and looking to punch, but Tsubakihara moved constantly, never giving Egawa a target for more than a couple of seconds and Tsubakihara landed throughout with a sharp jab and fast punches and kicks.

In the final round Tsubakihara continued with his lateral movement and landed with more fast kicks and punches from behind his controlling jab.

Egawa looked to up the pace and looked more determined in the last minute of the fight, but again Tsubakihara’s movement was too much to overcome. Tsubakihara opened up with a couple of fast high kicks, just before the bell.

The judges awarded the fight to Tsubakihara at the end by majority decision.