Hiroki Akimoto wants to win at ONE: ‘Fists of Fury’

Hiroki Akimoto beat Zhang Chenglong by split decision at ONE: ‘Reign of Dynasties’ Part II. It wasn’t the result the Japanese kickboxer wanted and he will have an opportunity to improve on that performance when they rematch this week.

Akimoto faces Chenglong for the second time in succession at ONE: ‘Fists of Fury’ and is looking to improve on his last performance,

“I don’t think it was perfectly decisive. The judges were split up so I guess I was almost even with him last time. This time, I will nail steady knockdowns and get the KO.” 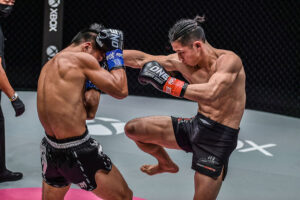 The win over Chenglong secured Akimoto the #3 spot at bantamweight and he admits to being surprised at how quickly he has risen up the bantamweight rankings,

“I felt like I made it so far, finally. I thought it might have taken more time.”

However he admits he was surprised to discover he would be rematching Chenglong immediately,

“I thought it would be a better idea for both of us to fight another bout with a different opponent before we fight again. But now that the match has been arranged, I want to prepare well and try to beat him.” 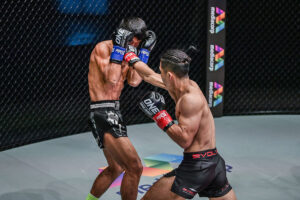 Having beaten Chenglong once the Japanese fighter feels under more pressure to perform. He wants to impose himself and put his opponent under pressure right from the opening bell,

“I want to aim to knock him down in the first round to win, even though I need to take a risk more than the last time.”

He has been sparring with two decorated Muay Thai champions at Evolve MMA and says they have been giving him some tips,

“I spar with Sam-A and Sagetdao, and they often give me advice after those sessions. For example, they taught me several patterns of counter-attacks against a left kick.” 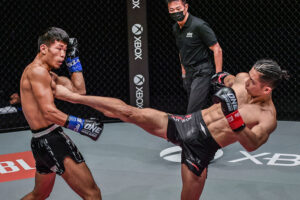 Another man who has won titles at Lumpinee, Captain Petchyindee, recently won the ONE Championship bantamweight kickboxing title. Ultimately that is the goal for Akimoto but the karate black belt says he is not in a rush,

“Just recently, the new champion has emerged. I don’t know if I’ll get to challenge for the title directly after this bout but I am not in a rush. I will fight bout by bout in a steady way, and hopefully, I will ultimately end up the champion.”