Hiroki Akimoto will be on headlining duty at ONE: ‘Reign of Dynasties’ Part II. The Japanese fighter has been booked to face Zhang Chenglong in a kickboxing bout.

The Japanese fighter will be moving up to bantamweight for this contest which will be broadcast on Friday night. He decided to make the move after a lengthy layoff,

“I broke my left fist in the (last) bout. I felt like I couldn’t compete for about a year, so I was hoping that I could build my body and move up a weight class during that time,” he explains. 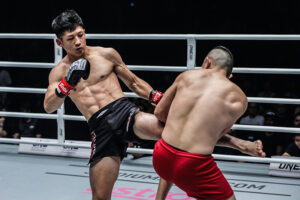 Akimoto fights out of Evolve MMA and says he has spent time sparring with one of the camp’s Muay Thai stars,

“Since I moved to Singapore, I have trained kickboxing while learning Muay Thai. He is in a lighter weight class, but I spar with Sam-A frequently. He has a quick reaction and high fight IQ. I can learn a lot from him.” he said.

Akimoto also feels he packs more power than he did last year,

“I think I am prepared well. My coaches say my kicks and punches have become heavier.” 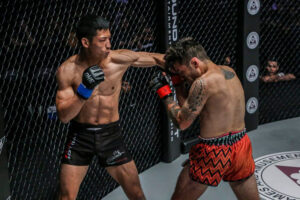 Zhang has already challenged for the bantamweight kickboxing title once. He dropped a decision to Alaverdi Ramazanov at ONE: ‘Mark of Greatness’ and Akimoto has studied that fight,

“He was knocked down and I think he got some damage. Some fighters try to buy time in that kind of situation but he kept going forward. He was even aiming for a counter-attack (and) with those characteristics I think he is a difficult (opponent).”

Akimoto comes from a karate background and is known for his kicks. Unsurprisingly he thinks this is one area in which he will have the edge,

“I think his punches are strong but I think I have advantages in kicks and at long range. I think he will close the distance of my kicks but when it happens I will counter with punches and kicks,” he said. 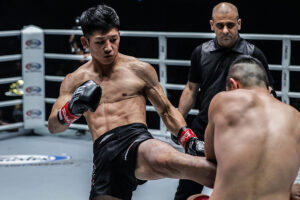 However, Akimoto is aware that he has been overly reliant on these kicks in previous fights. This time around he plans to mix up his attacks and use more punches,

“I mainly used kicks in matches in ONE but this time I am thinking I am going to use punches against the punching specialist. I built up my body firmly and gained power. So, of course, I have my sights set on knocking him down to win by KO.”

Akimoto’s name does not currently appear on the ONE Championship rankings. But there are some big names on the list of bantamweight kickboxers.

Zhang currently sits at #3. Nong-O Gaiyanghadao and Captain Petchyindeeacademy are above him while Rodlek PKSaenchaigym and Petchtanong Petchfergus are below him.

Akimoto would love to see his name on the list and knows he just needs a win over Zhang to make this a reality,

“I want to win, earn a spot in the rankings, and be a top-level contender to challenge for the title.”