Hiromasa Ougikubo has the pedigree to go all the way in the Rizin bantamweight Grand Prix. The 34-year-old was a Shooto world champion in two different weight classes and clearly fancies his chances of winning the tournament,

“Absolutely. I wouldn’t enter this tournament if I thought I was going to lose,” he told AsianMMA.com.

With fighters from various promotions in Japan competing in this tournament Ougikubo is proud to be representing Shooto,

“I think every fight I had in Shooto will help me in Rizin. I think Shooto is the best platform and I am here to prove it,” he added. Ougikubo is no stranger to the tournament format. He came out victorious at the Vale Tudo Japan flyweight Grand Prix in 2014 and admits that luck can be a factor,

“In a tournament, on top of all aspects of fighting, you also need luck on your side. And truly strong fighters always have luck on their side. This tournament will determine who’s the best out of 16 great fighters, which is awesome,” he said.

His opponent in the opening round will be Takeshi Kasugai. ‘Agar’ may be a Pancrase veteran with 34 pro fights under his belt, but Ougikubo is less than impressed with his credentials.

“None of the facts that you have just mentioned will convince me that he is any kind of threat to me. The level of competition we have had is totally different and I plan to show that in the fight.” 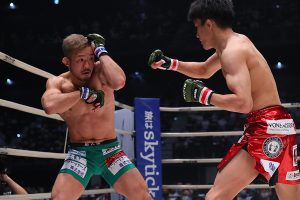 Ougikubo thinks Kasugai will be willing to engage in a striking battle and that’s exactly the sort of fight he wants,

“He’s going to want to strike with me and that’s what I’m going to do. I’ll take him where he wants the fight to be,” said Ougikubo.

Kasugai will be making his Rizin debut. He comes into the bout on the back of a split decision win against Toshinori Tsunemura at Pancrase 319, back in October. In contrast, Ougikubo has fought for the promotion on four occasions, including a title bout with Kai Asakura at Rizin 23.

The Kuji-born fighter has won four of his last five scraps; His triumph over Kenta Takizawa at Rizin 25 six months ago putting to bed some the doubts left by that knockout loss to Asakura.

Ougikubo acknowledges that it was a crucial win for his career,

“It was very important because that got my confidence back to where it was. Heading into that fight, my moral and confidence was at the lowest because of my poor performance in the title fight (against Asakura.)”

Out of the 16 competitors in the tournament Ougikubo picks out three favourites,

“Ryo Okada, Shintaro Ishiwatari, Kai Asakura, The reason is simply because they are skilled and tough fighters,” he said.

Having picked out the younger Asakura brother as one to watch, Ougikubo would like nothing more to avenge his loss, and take him out in the final.

“I would want that opportunity a lot!!”