Hiromasa Ougikubo meets Naoki Inoue in the semi final of the Rizin bantamweight Grand Prix on December 31st. The two will face off for the first time and the 34 year old is still bitter about being overlooked by the UFC.

He feels that the UFC chose Inoue instead of him and sees Rizin 33 as an opportunity to right that wrong,

“I have never been happy from the bottom of my heart in the past five years. I was so close to getting my UFC contract, but I never got it. Instead, a 19 year old kid, Naoki Inoue got that contract.” 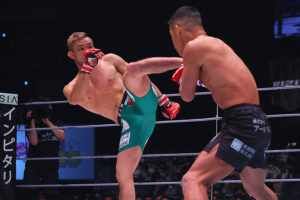 There was presumably room on the roster for more than one Japanese flyweight. But that is not the way that Ougikubo sees things.

He reached the final of TUF 24 in 2016. On the line was not just a UFC contract, but a shot at the reigning flyweight champion Demetrious Johnson.

Ougikubo had beaten three separate opponents to reach that final but was not offered a UFC contract after dropping a decision to Tim Elliott, The following year Inoue was offered a contract by the promotion and he went on to compete twice in the flyweight division. 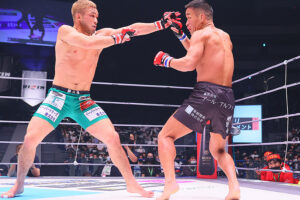 While the two decisions might not have been related but Ougikubo is entitled to believe the fighters he faced in TUF 24 were of a higher calibre than the opponents Inoue had been beating in Japan. Both men now find themselves competing in Rizin’s bantamweight division but the 34 year old is still bitter about missing out on the UFC,

“Ever since this tournament began, I had my eyes on Inoue and I’m excited to finally meet him in the ring. I will be the last one standing on New Year’s Eve.”

With a place in the final of the Rizin bantamweight Grand Prix on the line the stakes could not be much higher. But if Ougikubo needed any extra motivation he seems to have found it in a personal vendetta that dates back nearly five years.