Ramona Pascual made a statement on her Invicta debut as she pieced apart Shamir Peshewa in just a minute. The clash went ahead at a catchweight of 150lbs with the American stepping in at very late notice.

The Hong Kong fighter was due to take on Courtney King in the co-main event of Invicta FC 45 which took place in Kansas City on Wednesday night (local time). Pascual made short work of her replacement, finishing the fight early in the opening round.

Pascual moved to the US last year and came into the bout riding a three fight winning streak. The 33-year-old has been sharpening her skills at Syndicate MMA in Las Vegas and wasted no time in attacking Peshewa with a stout right hand and a left kick to the thigh.

The southpaw then cracked her opponent with a big left cross. ‘Hella Kitty’ responded with a right hand but failed to disrupt Pascual’s rhythm who planted another heavy kick to the lead leg.

???? @ramonapascual with the heavy strikes for the early victory in round one! #InvictaFC45 pic.twitter.com/n2XybTa2ms

A repeat of that shot gave way to the winning combination and the kick was followed by a right hand before a flurry of punches and a knee to the liver left the Tennessee native in obvious discomfort.

Sensing the finish, Pascual moved in to unleash more punches and another hard knee. Those strikes cemented the victory and left her counterpart crumpled on the canvas.

She improves to 6-2 while her opponent drops to 2-1 after tasting defeat for the first time in her career. After the fight Pascual said,

‘I feel amazing. A lot of hard work, just like everyone else that comes in here and it was good to see it all come to fruition. I’ve been in Vegas since March, I moved across the world just to make this happen (and) I made a lot of sacrifices. It happened exactly as I imagined it would. I visualized this, I trained for this, I prepared for this. There was really no other outcome so I’m ecstatic.”

Statement made by @ramonapascual at #InvictaFC45!

In the main event Jessica Delboni (12-3) avenged her split decision defeat to Alesha Zappitella (9-3) last year and captured the atomweight title. The fight went the distance but this time all three judges scores it for the Brazilian. 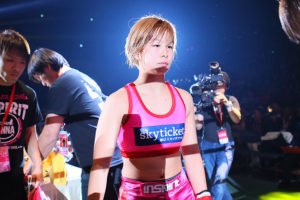