Three tournaments will conclude at ONE: ‘Century’ this Sunday. The flyweight and lightweight finals feature in the morning but arguably the most intriguing match of comes in the late card when Giorgio Petrosyan and Samy Sana square off in the Featherweight Kickboxing Grand Prix final.

Unlike its counterparts that have undergone multiple changes the kickboxing competition has been unaffected by injury, making it the most genuine representation of a Grand Prix of the three.

Read into that what you will, but the matchup alone is enough to make the mouth water – two battle-tested world champions putting it all on the line in what promises to be an inferno of a contest.

Petrosyan needs little introduction, his plaudits and pedigree speak for themselves. Known as ‘The Doctor’ for his surgical approach to striking, Petrosyan has achieved just about everything there is to achieve in the world of kickboxing. The Italian-Armenian began his professional career in Muay Thai, where he once held a staggering 42-fight undefeated streak. He then turned his attention to kickboxing, establishing himself as one of the best on the planet with wins at the K-1 World Max tournament in 2009 and 2010.

Since signing with ONE during the advent of its Super Series competition in 2018, Petrosyan is yet to be beaten.

But if anyone is capable of handing him his first loss, it’s striking savant Sana. The Frenchman of Algerian heritage was a star on the Muay Thai stage before he joined ONE, claiming the WBC Muay Thai World Championship in 2016.

His campaign was a mixed bag to start, but he’s begun to find his feet in recent months, improving steadily to earn a couple of statement wins, including a victory over Petrosyan’s brother, Armen, in November 2018.

It adds another wrinkle of interest to the bout, where you can be certain Petrosyan will be out for payback on behalf of his brother, and you can be equally certain that Sana will be prepared for exactly that. Petrosyan’s road to the final

The tournament got off to an auspicious start for Petrosyan, Entering as one of the favourites, he immediately hit a road bump in his quarter-final bout against Thai great Petchmorakot in Sinagpore.

Petrosyan was originally deemed to have lost a split decision, only to have the result reversed to a No Contest on the grounds of illegal clinching.

That resulted in a rematch, where Petrosyan swiftly staked his claim as the fighter to beat with a comprehensive unanimous decision win to move to the semis.

Waiting for him there was Thai enforcer ‘Smokin’ Jo Nattawut, a formidable obstacle in Petrosyan’s path to the main event.

But ‘The Doctor’ stepped up with his most emphatic display yet on the ONE Championship stage, overwhelming Nattawut with a trademark display of clinically crisp striking, punctuated by a stinging left hand that put an end to the bout in the very first round to book his ticket to the final. Sana’s road to the final

The 30-year-old Parisian nicknamed ‘AK47’ entered the Grand Prix on uncertain terms, coming off the back of a loss to Nattawut in Bangkok.

But the memory of that defeat was quickly erased by a statement upset win over Thai legend Yodsaenklai Fairtex in his quarter-final, which sent a message to the rest of the competitors that he was a legitimate contender for the title.

The semi-final pitted him against dangerous Russian Dzhabar Askerov in Bangkok, where Sana carried his momentum from his quarter-final victory to capture a convincing majority decision victory to advance to the competition’s showpiece bout in Tokyo. 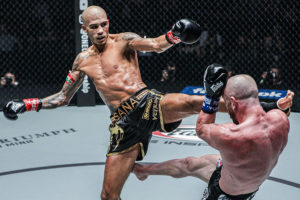 When you look at their respective resumes, it’s understandable to instantly start leaning towards Petrosyan as a fairly solid favourite.

But that wouldn’t be doing justice to the fire and brimstone that Sana has bought with him to the cage so far in this tournament. The Frenchman has overcome the odds at each stage, and made both fight fans and his colleagues stand up and take notice of his exceptional abilities.

However, that same degree of heart and determination lies within Petrosyan, and you can be certain a fighter of his experience won’t shy away from the bright lights come October 13.

When push comes to shove, it’s difficult to look past Petrosyan’s poise and lethal combination of both power technical striking and elite defence when it comes to predicting a winner.

That said, Sana’s height and reach are bound to pose problems, and Petrosyan will need his wits about him, as well as a willingness to adapt and adjust mid-fight.

Given what we know about Petrosyan, already considered one of the greatest kickboxers of all time, it seems a safe bet to believe he’ll do precisely that.