At ONE: ‘Destiny of Champions’ Yodsaenklai Fairtex will be fighting at featherweight (super welterweight in Muay Thai / boxing terms) for the first time in over a decade. The Thai superstar performed an open workout at the Fairtex Gym in Pattaya this afternoon and looked sharp ahead of his December 7th matchup with Luis Regis in Kuala Lumpur.

ONE Championship has introduced a system which restricts the amount of weight which a fighter can cut. In order to compete in the featherweight division athletes must weight 155lbs or less, but tests are conducted to ensure that no-one can reduce their weight through intense dehydration which has become standard practice in combat sport.

People were surprised to see Yodsaenklai booked for a featherweight fight. He has spent the last 12 years competing at 154-160lbs with promotions that don’t regulate a fighter’s hydration levels meaning that most fighters in his division would look to cut at least 10lbs. 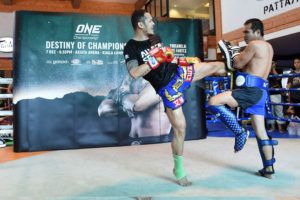 However he told the media at the Fairtex Gym that he was already close to the 155lbs limit,

Regis is Australian and will be making his ONE Super Series debut. Yodsaenklai has been researching his opponent and sees a style that might have been made in Thailand,

“I have watched some of his fights on YouTube. He has a Thai style of fighting, how he moves and throws his kicks.”

On his ONE Super Series debut Yodsaenklai fought in the cage in Singapore, wearing MMA gloves. He beat Chris Ngimbi by decision and confirmed he would be using the smaller handwear again in Kuala Lumpur next week,

“Itâ€™s Muay Thai rules but with small gloves and in a cage.” 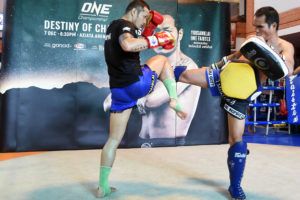 The Thai journalists wanted to know if Yodsaenklai was worried about fighting with MMA gloves. Muay Thai fighters often use a high guard to protect themselves which is more difficult to do without traditional boxing attire but the 33 year old sees it as a factor in his favour.

“I’m not worried about fighting with small gloves. It should make it easier to get the KO.”

Yodsaenklai has spent a lot of time training and fighting in China recently. But to prepare for this fight he has been back at Fairtex, his base since 2005, and is in confident mood coming into next week’s contest.

“The camp has gone very well. Iâ€™ve trained hard and am ready.” 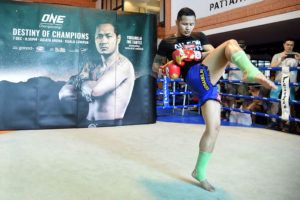 His manager, Prem Busarabavonwongs, is feeling confident too although he says there is still work to do ahead of next Friday’s fight at the Axiata Arena in Kuala Lumpur.

“He is about 95% ready now, heâ€™s been training for two months and has really stepped it up in the last two weeks,” he said.

He also echoed Yodsaenklai’s words about how the MMA gloves could be key to a stoppage win.

“He will be coming for the KO (with) hard left kicks and hard punches. The small gloves will help to get the KO.”

Thai fighters haven’t had it all their own way in the ONE Super Series. Petchmorrakot Wor Sanprapai and Jo Nattawut have both suffered defeats but Prem doesn’t see his man having too much trouble against Regis.

“We are very confident. Yod has had well over 100 fights to his opponents 30 and should be the favourite in every department.”