Ilias Ennahachi held his nerve to keep his belt after a very tricky defense of his kickboxing flyweight championship in the main event of ONE: ‘Age Of Dragons’ in Beijing.

The Dutch-Moroccan champion retained his belt via split decision after a five-round world title contest with China’s Wang Wenfeng went all the way to the judges’ scorecards.

Both men immediately engaged in a back-and-forth war of attrition from the very first round, tagging each other with powerful combinations. 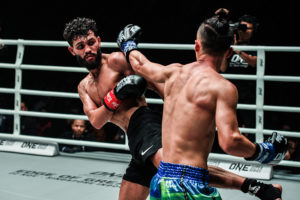 Wang looked to pick up his pace in the second frame but was met with a barrage of powerful shots from the titleholder.

The championship clash took a drastic turn in the third stanza when Wang turned up the aggression as the pace and intensity visibly and audibly increased. The powerful blows could be heard echoing around the venue and evoked gasps from the audience.

Ennahachi continued to press forward, but he found a willing partner in Wang who pinned him against the ropes and connected with some solid punches and kicks to the midsection.

The action was fierce and intense in the last two rounds of the title tiff, but in the end, two of the three judges at ringside scored the bout in favor of Ennahachi who prevailed courtesy of a split decision in the rubber match. 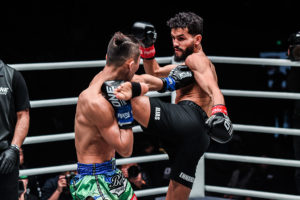 A new champion was crowned in the ONE Super Series as Roman Kryklia claimed the inaugural kickboxing light heavyweight title at the expense of Tarik Khbabez in the co-main event at the Cadillac Arena.

After a spirited first round of action that saw both men land significant strikes, Kryklia ended matters abruptly in the second frame, with the Ukrainian scoring his first knockdown courtesy of a head kick.

Though Khbabez managed to beat the count, Kryklia smelled blood and staggered his opponent with a knee-right hand combination that forced the referee to give the Moroccan a standing eight count.

Khbabez tried to brush the daze from the punishing blows off and continued the fight on wobbly legs, but one more hard combination from Kryklia was all it needed to put him away. In another ONE Super Series match in Beijing Yodsaenklai Fairtex suffered his second straight loss, yielding to Russia’s Jamal Yusupov by way of second-round knockout.

Determined to place himself back on the winning track, Yodsaenklai came out of the gates aggressively, pressuring Yusupov against the ropes with his patented punches and low kicks.

Despite having the momentum entering the second round, Yodsaenklai was caught by surprise as Yusupov took control and sent him to the canvas with a stinging jab out of nowhere.

Yodsaenklai answered the referee’s ten-count, but once the action resumed, Yusupov swarmed the Muay Thai legend, unleashing a torrent of harrowing blows to drop him again.

A stunned Yodsaenklai struggled to get back to his feet, forcing the referee to wave it off and award the win to Yusupov. 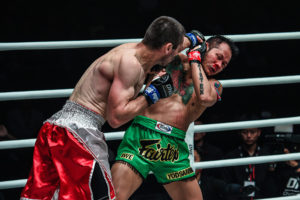 Meanwhile the MMA bouts at ONE: ‘Age Of Dragons’ put fans inside the Cadillac Arena on the edge of their seats.

Chinese prospect Meng Bo (14-5) needed less than three minutes to thwart former title contender Laura Balin (11-6) in their atomweight encounter, decking the Argentinian with a left hook and then pounding her with a lethal right hand for good measure.

On the other hand, India’s Ritu Phogat (1-0) turned in an impressive debut, operating behind her impeccable ground game to topple South Korean foe Nam Hee Kim (0-1) via first-round technical knockout in their atomweight encounter.

Filipino strawweight Jeremy Miado (9-4) opened the main card with a jaw-dropping victory, shutting the lights off on China’s Miao Li Tao (5-2) with a perfectly-placed flying knee to the chin in the first round.