Isao Kobayashi has proven once more why he is the reigning featherweight King Of Pancrase by turning in a dominant performance against Akira Okada in their non-title showdown.

Both men collided in the main event of Pancrase 316, which took place at the Shinkiba Studio Coast today. The champion showcased a dominant wrestling attack and exhibited a relentless pace to hand Okada his fourth consecutive loss.

From the opening bell, he circled and tried to cut off his opponent’s movement. Kobayashi was constantly looking for a way inside to utilize his wrestling but was unable to do so during the first two minutes of action as Okada forcefully pressed forward.

Unfortunately, this made Okada vulnerable. Kobayashi seized the opportunity and quickly latched on a guillotine choke.

The former was able to break free from the hold. But the Team Never Quit standout immediately established top position and took his foe’s back to lock in a rear-naked choke.

Okada somehow survived, defending the submission in the closing moments of the first round. As the second frame began, he mustered up some offense on the feet but had limited success. 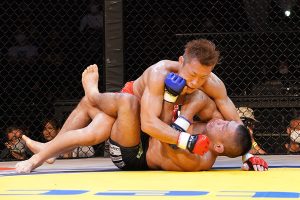 Kobayashi had an answer for every attack, continuing to control the pace and direction of the contest. He briefly threatened with another guillotine choke in the process.

In the third and final round Kobayashi resumed his wrestling based approach to the bout as he denied Okada time and space to use his strikes. He planted his adversary on the mat with a beautifully timed takedown.

From there, it was all Kobayashi as he smothered Okada on the ground. Once the round came to an end, there was little doubt as to who would walk away with his hand raised in triumph.

The judges awarded a unanimous decision in favor of Kobayashi with three 30-27 scores across the panel. He improved his professional standing to 26-5-4 while Okada drops to 13-9-3. 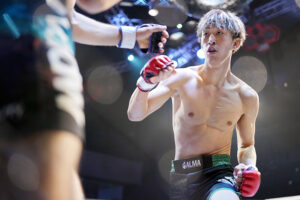