Ritu Phogat stated that her wrestling skills would be too much for Itsuki Hirata‘s judo when the two atomweights meet at ONE: ‘NextGen’. The Japanese fighter fired back with a warning to the opponent who awaits her in Friday’s semi final,

“Tell her not to say such scary things. I’ll beat you up.”

Hirata acknowledges that Phogat is a top level wrestler,

“I believe that her strength is her superb wrestling ability. Also, she can hold her position on the ground.” 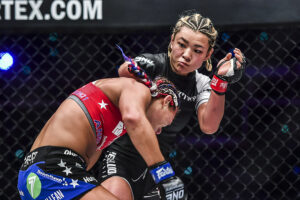 But she does see one obvious flaw in the Indian’s game,

“She’s not quite there yet in terms of striking. I’m not good enough yet (either), but I think she’s not even as good as me just based on her fights so far.”

She has been preparing for the Indian wrestler by working with one of the best grapplers on the ONE Championship roster and believes she will be able to stuff her takedowns,

“I think I can do it. I’ve been practicing a lot on the ground since my last fight. I have also trained with Shinya Aoki and practiced various things in the gym.” 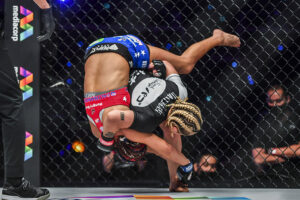 Hirata has finished every opponent she had ever faced, as a pro and an amateur, prior to her decision win over Alyse Anderson in the quarter final. She was disappointed to go the distance and hopes to end Friday’s fight much earlier,

“There are a lot of strong wrestlers at Krazy Bee, so I’ve been practicing wrestling and developing my strengths. What I mean by ‘my strengths’ is to improve my finishing rate. I’ve been able to finish my fights, but the last time, I won by decision. That was a boring fight, so I want to finish next time. So, I’m trying to master my techniques.”

She laughed off suggestions that Phogat might be able to knock her out, stating that the Indian’s striking could not possibly have improved sufficiently in such a short space of time to make that a realistic threat. Hirata sees this as a battle between her judo and her opponent’s wrestling and knows exactly how the fight is going to play out,

“I’ll show that judo is stronger.”