ONE Championship’s atomweight division is hotting up. The title will be on the line at ONE: ‘Century’ and a couple of top contenders are in action including Itsuki Hirata.

The 20 year old will be putting her undefeated record on the line against Rika Ishige. With Mei Yamaguchi also in action on October 13th the onus is on Hirata to outshine her more experienced compatriot.

She plans to leave a lasting impression on the audience at the Ryogoku Kokugikan,

“I want to show my striking. I’ve been focusing on that, and ground and pound. Before my last match, I said the same thing, but in the end, it went to the ground, so this time my main aim is striking,” she said.

Ishige, who is half Japanese, is primarily a grappler. It is something Hirata is well aware of and she has been preparing accordingly,

“Watching her matches, there’s a lot of ground game. This will probably be my first opponent with good grappling so I’ve been training and I’m ready for that. If I see a submission opportunity I’ll go for it but I’m going there to strike.” 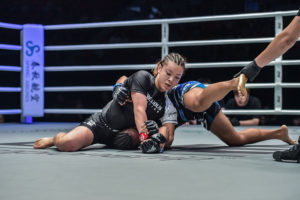 Hirata promises to be aggressive in what will be the fifth bout of her professional career,

“I can’t let her come to me. I have to push forward, put her against the cage and wrap it up with strikes. It would be great if I could also show my ground and pound.”

She signed for Asia’s biggest MMA promotion after fighting on some smaller shows in Japan. Hirata made a successful debut at ONE: ‘Legendary Quest’ and says she had no issue coping with the increased pressure and expectation,

“I wasn’t nervous at all I really enjoyed it. I’ve always enjoyed competition and I never really get nervous. I’m always looking forward to the next one.” 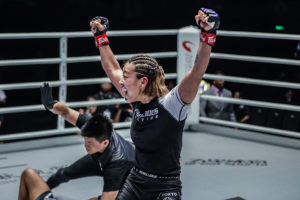 She didn’t waste any time celebrating after the submission win over Angelie Sabanal and has been training non stop for her second ONE Championship fight,

“Right after the fight, I started training and preparing for this next one. I’ve been weight training three times a week to get bigger, and doing conditioning,” she said.

The promotion’s inaugural event in Tokyo took place earlier this year and was entitled ONE: ‘A New Era’. The significance was not lost on Hirata who hopes to represent the new generation of Japanese fighters,

“This time I want everyone to see me finish by KO in the first round. I’m bringing in a new era!” 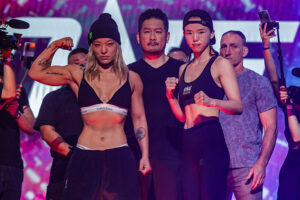 Heqin Lin tells Itsuki Hirata: ‘you are not worth my respect!’