Anissa Meksen has made it clear that she wants to fight Janet Todd. The French fighter has even accused the American fighter of ducking her.

But Todd, who rarely bothers to update her social media, is refusing to get sucked into a war of words with the former Glory champion, She did, however, flat out deny that she was refusing to face the French fighter,

“I donâ€™t think (Meksen) has her facts straight. I mean, she can believe whatever she wants, but Iâ€™ve always taken the fights that were offered to me,” she said.

Todd has not fought since April. It looks like she will be taking at least a year out but the current atomweight kickboxing champion says she still wants to take on the top contenders in the division,

“ONE Championship finds the best fighters in the world, including (Anissa Meksen). When I call myself a world champion, I want to be able to challenge myself against the top in the world,” she said. 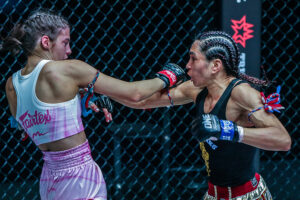 Meksen accused Todd of refusing to fight her. But the American went on the record to confirm that she would be open to fighting the French fighter,

“I think sheâ€™s another good addition to our weight class. Iâ€™m just here to fight. If thereâ€™s a contract, Iâ€™ll sign it and Iâ€™ll fight. And if we do fight, itâ€™s going to be a good fight.”