Jarred Brooks has shaken up the strawweight division. The American stormed into the #3 spot in the division after beating Lito Adiwang on his promotional debut.

He takes on Hiroba Minowa at ONE: ‘Only the Brave’ on Friday. Brooks has been very vocal about wanting a title shot and doesn’t think the Japanese fighter will be able to stand in his way,

While he is confident of beating Minowa it doesn’t sound like Brooks is overlooking the Japanese fighter,

â€œ”Everybody looks over Hiroba, man. Hiroba is a tough, tough, tough kid. I am not going to sit here and say that Iâ€™m just going to run past him and, â€˜Whatâ€™s up, Josh (Pacio,) weâ€™re gonna get it,â€™ you know,” he said. 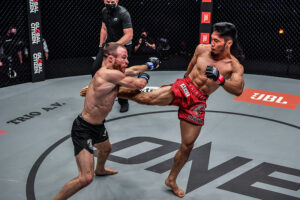 Brooks hasn’t been shy about calling out Joshua Pacio but he believes there are dangerous opponent elsewhere at strawweight,

â€œI think that Hiroba is probably the best in the division besides Bokang (Masunyane). So yeah, Iâ€™m more focused on him right now than Joshua. But yeah, Josh, of course, I am coming for you,” he said.

However he isn’t promising a fast finish. Brooks knows the contest next Friday could well go the distance,

“Every fighter wants to knock that guy out and get them out in the first round, in the first 30 seconds. Thatâ€™s cool. I mean, I would really, really enjoy doing that. But thereâ€™s 15 minutes, so youâ€™ve got to play with what time can give you, or what your opponent can give you,” he said.

But while Brooks acknowledges that Minowa is strong he knows that he is stronger,

“I think he might be strong, but he hasnâ€™t felt anybody as strong and as fast as me at my weight. I think he has his hands full. Heâ€™s going to have a tough time.”