Many expected the fan-favorite, Trujillo, to steamroll his opponent but Radi did not go away that easily.

Everything started off as expected for Trujillo in the first round. He connected with a right hand and forced the action to the mat. Radi spent the next few minutes staving off kimura attempts and finally got back to his feet with around ninety seconds left. The Monarchy MMA product mainly utilized the front kick and jab while circling away while Trujillo seemed to be chasing the knockout with big, looping right hands that did not come close to its target. However, the kicks to the front leg had wobbled Radi on a few occasions.

The middle frame was the most surprising for all in attendance with Radi almost getting the submission.

Trujillo marched forward and slammed Radi on his back, immediately landing in side control. The Team Quest Thailand fighter meticulously worked to get mount position but Radi powered out and scrambled.

During a kneebar attempt by Trujillo, Radi escaped and slid into mount. Avoiding any damage, Trujillo got the sweep and tried to pass the legs but got himself caught in a deep triangle choke.

While fighting off the choke vigorously, Trujillo fell forward and both fighters were stuck in a stalemate for the final two minutes.

Once the bell rang to end the round, Trujillo looked like he had been struggling to avoid losing consciousness . With one round apiece going to each combatant, the third was vital to win the fight.

With exhaustion and fatigue setting in after the pace of the first ten minutes, both athletes entered a battle of attrition in the final round. They spent the first half of the round like two zombies from an episode of “The Walking Dead” with their mouths open and movement limited.

With around a minute left on the clock, Trujillo put everything into a single leg and dropped Radi onto the canvas. Sitting in side control, Trujillo maintained position and stayed active enough to take the fight.

With this unanimous decision win, Trujillo moves to 5-1 overall and extends his streak to two in a row. On the other hand, Radi loses for the second time in his pro career and drops to 1-2. 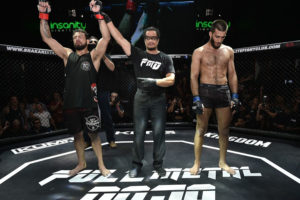 Setthawut made easy work of Greywal after defending the clinch and separating ‘Benz’ hit a clean left hook, straight right combination that collapsed his adversary instantly. The Thai walked off without waiting for the referee.

Setthawut returns after being absent from competition for over two years and raises his record to 2-1, meanwhile, Greywal is stopped for the second time in a row on an FMD car and drops to 0-2. In the fight of the night, Stan Tskitishvili and Arato Hidetaka displayed a level of violence and grit that Full Metal Dojo fights are renowned for. The two debutants did not hold back and ran full force at each other with reckless abandonment.

When the bell rang to kick off the action, ‘Stangief’ shot out like a canon with multiple uppercuts and knees that had his Japanese foe rocked and back-peddling. Weathering the storm quite well, Arato was able to clip Tskitishvili with a left and clinched up along the fence.

Once they separated, it was Arato’s turn to put on the punishment. While getting slammed with some wild hooks, ‘Stangief’ dropped for a few ill-advised takedowns and paid the price with knees to the face and shots to the body.

The rest of the round had the Ukrainian holding on for life while defending submission attempts and eating solid punches.

Looking clearly exhausted from the onslaught, ‘Stangief’ was easily taken down at the start of the second. Arato moved into a crucifix position. From there, he isolated both arms and crushed his opponent’s head with a myriad of knees to the face that ended the fight.

The Yorky MMA trained Arato (1-0) came in as the underdog and leaves with an impressive result while 29-year-old Tskitishvili (0-1) goes back to the drawing board after a disappointing start to his pro career.

Full Metal Dojo 17, Bangkok, August 31
Javier Trujillo def. Mostafa Radi via Decision (Unanimous) at 5:00 of Round 3
Setthawut Naimthanom def. Vinod Dave Singh Greywal via Knockout (Punch) at 1:51 of Round 1
Hidetaka Arato def. Stan Tskitishvili via TKO (Knees) at 3:01 of Round 2
Alex Munro def. Bryson Dean Collins via TKO (Knees) at 2:01 of Round 1 *Amateur
Anisha Khadka def. Meredith Wenrich via TKO (Punches) at 2:05 of Round 1 *Amateur
Thanthanuth Tunkamhaeng def. Seksun via TKO (Punches) at 3:19 of Round 1
Sim Kai Xiong def. Ko Aung via Submission (Rear-Naked Choke) at 1:42 of Round 3