Growing up in Baguio it is difficult to be oblivious to MMA. Jenelym Olsim was introduced to the sport by a friend at school when she was just 17 years old and would go on to become one of the top female fighters from the region.

Olsim is coming off a very impressive submission win over Brazilian Maira Mazar. This Friday her fight with Bi Nguyen will be broadcast at ONE: ‘Battleground’ Part III and if she wins that the Filipina will be back in action next month.

It has been a big year for the 24 year old who says her journey into MMA began seven years ago,

“It started from the wallpaper of my college classmate’s phone. She had this photo where she was in the middle of the ring, and I thought, ‘woah, this is so cool,’” she recalls. 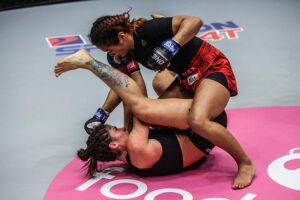 Her friend trained at Team Lakay but at the time the membership fees there were beyond Olsim’s budget,

“She used to train in Team Lakay (but) she knew that I didn’t have the finances to enroll. She brought me somewhere and taught me the basics of striking and the ground game, after two weeks, I was already competing.”

Given the lack of training time it is perhaps unsurprising that this kickboxing bout would end badly. But for Olsim the disappointment lingered,

“I lost but I didn’t know what I was signing up for at that time. I didn’t expect I would get so beat up. I was really ashamed of that performance. I didn’t want to show my face to people.” 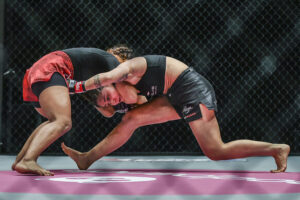 This would have put most people off fighting but it only made the teenager more determined,

“It really fired me up. I knew for myself that I could do it. It was just a matter of training and getting more knowledge in the sport.”

She joined a gym called Tribal Torogi and persuaded her brother, Jerry Olsim, to sign up too. He is now a successful mixed martial artist too and has fought several times for ONE Championship.

With the top fighting team in the Philippines on her doorstep Olsim and her brother eventually decided that the best place for them to fulfill their ambitions would be the legendary Team Lakay,

“When I moved to Team Lakay, I just really polished my grappling. Since I came from a Muay Thai background, they asked me to focus on grappling and wrestling more. The feedback has been good, they’ve been saying that I’m a fast learner.” 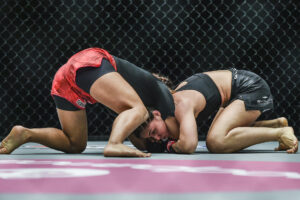 At ONE: ‘Fists of Fury’ Part III she submitted a Brazilian opponent with a rear naked choke. The time spent working on her ground game had clearly paid off,

“After my first fight in ONE Championship, I became more confident in my ground game. I knew the things that I had to do and if I had the chance to lock in a submission, I should never waver and lock it in,”

Nguyen is an experienced opponent who is coming off a hard fought decision win over Ritu Phogat. Olsim is impressed by the Vietnamese / American atomweight’s power but is confident she will have ‘an answer’ for it,

“Bi is a tough fighter. She has that strong heart and I admire her for that. I have seen her fights and undoubtedly, she has that will power that I have to watch out for. But I believe with the training that we’ve had, I will have an answer for that,” she said. 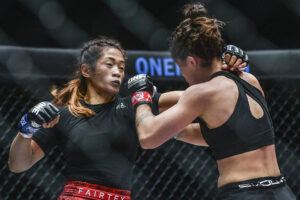 Olsim can book a bout with Grace Cleveland at ONE: ‘Empower’ if she beats Nguyen. It would mean getting at least three fights in during 2021 and the Filipina is determined to secure a spot on that card,

“I don’t want to predict what the finish will be, but either way, I’m going there with all my heart and I’ll do everything just to get the win. Whatever it takes.”