Jerry Olsim is set to compete at ONE Warrior Series 8 tomorrow in Tokyo. The undefeated featherweight faces Ryoji Kudo and needs no reminding about what could be at stake.

Olsim has seen his teammate Lito Adiwang earn a ONE Championship contract on the back of some strong performances on the Rich Franklin reality show.

Adiwang will be in action at ONE: ‘Century’ the following weekend and Olsim is well aware of what he stands to gain with another good showing tomorrow,

“This is such a huge match for me because a lot is at stake,” he said. 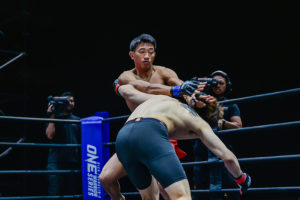 However the 26 year old, who has four ONE Warrior Series wins to his name already, is not just motivated by the possibility of personal gain. He wants to give his Team Lakay training partners Adiwang and Kevin Belingon a confidence boost ahead of their October 13th matchups,

“I know that an impressive performance here would get me on the main roster, and at the same time, I want to give the team a win before their big matches,” he said.

Having fought and won four times for ONE Warrior Series the Team Lakay prospect is familiar with the rules and regulations. But his previous fights for the promotion have all been in Singapore and this time he is facing a Japanese opponent in Tokyo.

In that respect it is a different type of challenge but Olsim says whatever happens he will be well prepared,

“There is pressure but my eagerness to win mitigates that. This is the reason why I’m working really hard for this. I know a lot of people are counting on me and I am up to the challenge.” The likes of Belingon, Honorio Banario and Eduard Folayang have blazed a trail for Team Lakay in ONE Championship. Fighters like Olsim and Adiwang are part of a new generation which is emerging from the Baguio powerhouse.

Wearing the famous red shorts brings a sense of responsibility. It weighs heavily on Olsim’s shoulders and he’s determined to get his team’s week off to the perfect start with a win in Tokyo tomorrow,

“I’m more motivated now. I’ve been waiting for this for a long time (and) I want to win not just for me and my dreams, but for my family and my team who have always supported me in everything.”