Jessica Andrade is entering enemy territory to defend her belt against Weili Zhang at UFC Shenzhen. But the Brazilian champion says she will not be intimidated by the Chinese crowd,

“Fighting on foreign soil is not new to me. I’ve been doing that since I signed with the UFC. It’s no problem for me. True enough, it’s a tough task, but I have to step up and prove that I am a warrior,” she said.

The 27-year-old native of Parana, Brazil is set to put her women’s strawweight title on the line for the first time in the main event this Saturday. She believes beating a Chinese fighter in China would be the perfect way to underline her credentials as a champion,

“I will show her supporters that I am the real champion. I might be the one holding the title, but I’m also here in China as a fighter who seeks to fight the best and be victorious,” she said. 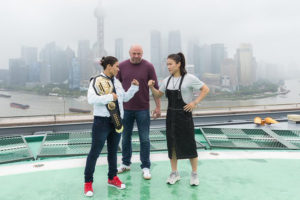 Since being beaten by Joanna Jedrzejczyk in a 2017 title fight Andrade has been on a tear, defeating top-tier contenders such as Claudia Gadelha, Tecia Torres and Karolina Kowalkiewicz before the second-round slam knockout of Rose Namajunas that earned her the 115lbs title earlier this year.

That fight was in Rio de Janeiro but Andrade has no qualms about taking to the road to defend her new belt,

“I’m not worried about a hometown decision. I’m confident that it will be an even playing field in our fight,” she stated.

“I am not going to zone out. It doesn’t matter if they will cheer or boo. It’s all energy. The more they are into the fight, the more pumped up I get.” 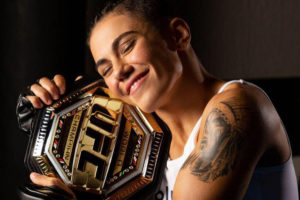 Andrade is not concerned about the hostile atmosphere but has plenty of respect for her opponent,

“A true champion can fight anywhere and under any circumstance. I am excited to get back inside the cage and expect nothing less than a spectacular showing in Shenzhen. I respect my challenger and what she brings to the table, but I am returning home victorious and with my belt still over my shoulder.”

After a close contest judges have been known to give the nod to the local fighter. It is something Andrade is well aware of and having won her title with a devastating KO she hopes to finish Saturday’s fight in similar fashion,

“Everyone has a different interpretation. It might be different from the perspective of the judges and the fans. If I want to retain the belt, I have to leave Shenzhen without any doubt that I won the fight. We will go for the finish.”