It has been over two years since Johnny Case last fought for Rizin. Covid-19 restrictions have kept the American away but he is back next month.

Case is the only man to ever defeat reigning lightweight champion Roberto de Souza and at Rizin 35 the two men will run it back with the belt on the line. The UFC veteran has not competed in MMA at all since his last bout in Japan and is excited to be returning to action again after a long break,

“I’m extremely grateful for this opportunity to fight for the Rizin belt in front of the Japanese fans. I have fought all over the world but there are no fight fans like the fans in Japan.” 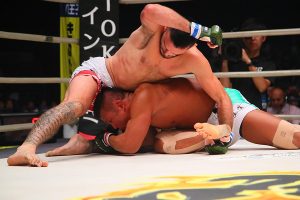 Having already beaten the champion at Rizin 19 he feels that the belt belongs to him. He does have a loss to former lightweight king Tofiq Musaev on his record but the title wasn’t on the line that day.

Musaev saw his crown snatched away by De Souza and in Case’s mind the Brazilian is just borrowing the belt from him,

“I believe the belt Souza currently has is mine and I’m just lending it to him for the moment and it will return to it’s true owner in April.” Interestingly Case has been competing exclusively in professional boxing since his last Rizin fight. He has won three fights out of three with all those wins coming inside the distance.

His opponents did not have good records but it gives an indication of the way his fight with de Souza could go. The Brazilian holds a BJJ black belt but isn’t known for his striking.

It has the makings of a clash of styles but Case is just happy to be back fighting in Rizin again after a long break,

“I look forward to meeting Souza and the best fans in the world soon.”