The stage is set for an intriguing main event at ONE: ‘Big Bang’ Part II which is being broadcast this Friday from Singapore. Former flyweight Muay Thai champion Jonathan Haggerty returns after an extended absence to take on Taiki Naito.

After a long break due to the pandemic Haggerty is grateful to finally get the chance to return to action,

“The pandemic has not affected my training at all as I have a family gym, so my training has been spot on. I’ve had nearly a whole year to prepare for this opportunity. It’s very exciting to finally get the chance to get back in the ring and I’m so so grateful that ONE Championship have provided us with the platform to do so.” 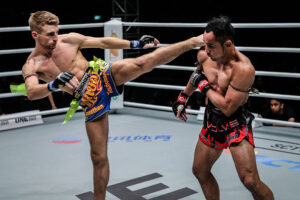 Naito looked impressive in his last fight, when he dropped Savvas Michael for an eight count en route to a decision win at ONE: ‘Warrior’s Code’ in February. He has a slick, elusive style and likes to catch his opponents with fast counters as Haggerty is well aware,

“I know that he is a counter fighter, he likes the left hook, right hand and inside left low kick. I watched him beat Savvas Michael with his boxing. The plan is to overwhelm him, use fakes to force mistakes and open him up to my power shots.”

Although he wants to regain his belt, Haggerty is not in a rush to face Rodtang Jitmuangnon again and has his sights set on another high profile fight first,

“I want to fight Petchdam next and then have a shot at the ONE Championship title and to regain it.” 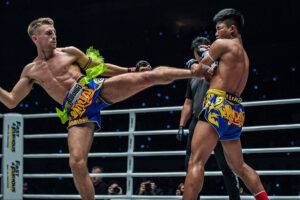 Haggerty put the last loss against Rodtang down to a loss of composure that saw him stray from the game plan,

“The last fight with Rodtang, I let my emotions get involved, the fighter in me just wanted to sit down and war it out with him. I truly believe that me and my team have a game plan that will work against Rodtang and that I have matured enough in our last two bouts to implement it.”

Having already lost twice to Rodtang the Englishman also confirmed he would be willing to fight under a slightly different rule set in order to fulfill his title dreams,