Reinier de Ridder made his case for a shot at two-division titleholder Aung La Nsang’s middleweight championship, defeating Brazilian contender Leandro Ataides by way of unanimous decision in the main event of ONE: ‘Warrior’s Code’ in Jakarta.

However, it was not a walk in the park for De Ridder. Both men traded heavy blows and showcased high-level, tactical grappling skills all throughout the three-round middleweight showdown.

Neither of the two would give each other any quarter from the get-go. Although De Ridder would have his moments on his feet early on, most of the action took place in the grappling arena, where Ataides enjoyed a slight advantage. Determined to inch closer to a date with La Nsang, De Ridder bombarded Ataides with a series of hard elbows, slashing head kicks, and occasional jabs in the second round.

It was clear that Ataides did not respect the power of De Ridder as he gambled in exchanging strikes with his opponent. The latter took advantage of it, increasing his offense as the Brazilian surged forward.

The same offensive tempo in the second round carried over into the third frame. The two willingly swapped short jabs, but it was Ataides who responded stronger with power shots, which sent the Dutchman reeling backwards. 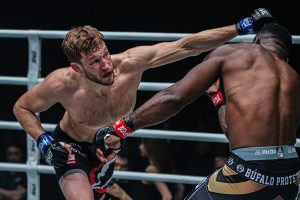 After the referee called for an injury time due to an unintentional knee shot to the groin by De Ridder midway of the period, Ataides continued to press the action.

Despite being trapped in the clinch, De Ridder dug several knees into Ataides’ ribs. As the Brazilian got out from the tie-up, the unbeaten Dutch stalwart nearly scored a single-leg takedown in an attempt to punctuate the round on a strong note. But the bell sounded before he could complete the sequence.

Throughout five grueling rounds, De Ridder did just enough to get the nod on the scorecards of the three judges at ringside. 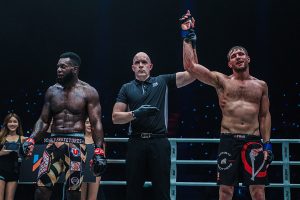 Meanwhile, unbeaten standout Iuri Lapicus (14-0) of Moldova accomplished a statement victory in his sophomore appearance under the ONE Championship banner, spoiling the lightweight debut of former featherweight champion Marat Gafurov (17-3).

Lapicus wasted little time in bringing the action to the ground as he effortlessly countered the Russian’s takedown attempt with a hip toss. On the mat, he immediately positioned himself into a back mount and fastened a deep rear-naked choke to put Gafurov to sleep in just 67 seconds. 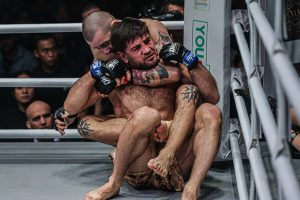 In another MMA match of the evening, Koyomi Matsushima (12-4) of Japan and Kim Jae Woong (10-4) of South Korea put on a spectacular showcase of aggression to the delight of the Istora Senayan crowd as the two hard-hitters engaged in a skirmish in the opening moments of the featherweight collision.

Although he is known for his dangerous striking game, Matsushima flaunted his ability to score takedowns right off the bat, enabling him to pacify his South Korean’s firepower in the stand-up trade.

While Matsushima’s constant pressure with his takedowns eventually drained Kim, he changed his approach in the third and final frame, setting up his patented overhand right and then unloading a left hook that dropped the South Korean to the canvas.

With Kim lying defenseless on his back, Matsushima followed him to the floor to rain down a torrent of harrowing blows, achieving the stoppage victory and the redemption after falling short in his featherweight title tilt against Martin Nguyen in August of last year. In the lone women’s MMA bout on the card, ONE Warrior Series alumna Nyrene Crowley (3-3) of New Zealand seemed to have solved the code to score an upset against rising Japanese heroine Itsuki Hirata (3-0) in their 53.4kgs catchweight contest.

Unfortunately for Crowley, she proved to be no match for Hirata’s relentless pursuit of scoring takedowns, yielding by way of third-round technical knockout.

Operating behind her highly-touted judo background, the undefeated Japanese sent her opponent crashing to the mat with five hip tosses all throughout the encounter.

When the fatigue started to wear on Crowley’s face in the third round, Hirata controlled her opponent on the ground and secured a full mount.

While she continued to pour on more strikes, Hirata then moved onto Crowley’s back, and it was all she needed to unleash the heavy ground-and pound attack to clinch the stoppage.