At the onset, Jo blasted in throwing heavy leather to initiate the action. He struck first with multiple overhand rights that landed around the ear. Kwon had enough and tried to slow down the movement by pressing his adversary inside the clinch. The Team MAD representative tried for a trip takedown but was reversed along the fence.

After some tussling and trading places, Kwon was dumped to the canvas. Jo landed directly in side control and stayed heavy with his hips to stabilize. He slowly advanced position while peppering Kwon with short punches. 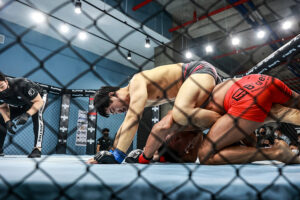 Eventually, Jo slid into full mount and rained down punches all the while his opponent was flopping around like a fish out of water. This led to him giving up his back and that was the beginning of the end.

A few punches to the side of the face opened up the neck. Jo wrapped it up with a rear-naked choke and there was no escape.

Jo picks up his first submission victory and elevates to 3-8, meanwhile, Kwon is back in the red at 4-10-2. 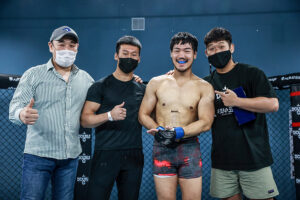 Jung Min Park wasted no time against Kyung Min Jo in the co-main event showcase. The southpaw snapped the jab early after getting nailed by a straight right hand down the pipe from his opponent.

Park ate another right hand yet marched forward and nearly missed with a head kick. Shortly after landing another quick jab, he grazed Jo with his shin.

Jo caught the kick and rushed across the cage to engage in some wrestling. Defending well against the cage, Park slipped his arm out and squeezed it into the neck. 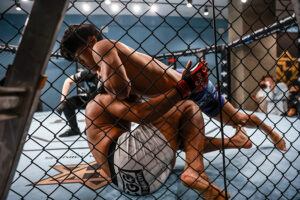 Jo had gotten stagnant and Park was able to capitalize on the mistake with a modified guillotine grip. He didn’t even need to pull guard because the tap came instantly when he sprawled.

That is consecutive victories via first-round guillotine for Park, who moves his record to 2-0. Jo, on the other hand, is finished for the third straight time and drops to 1-3.