The featherweight title changed hands at Rizin 31. Promotional newcomer Juntaro Ushiku snatched the belt from former champion Yutaka Saito with a second round TKO in Yokohama.

Ushiku was switching stance in the opening round and landed a solid body kick from southpaw but ate a left hook for his troubles. Saito dragged him down and briefly had his back but the challenger slipped out easily.

The champion tested his opponent’s guard with a one two but Ushiku’s defence was tight. They clinched up in the corner of the ring and the referee separated them with 90 seconds remaining in the round. 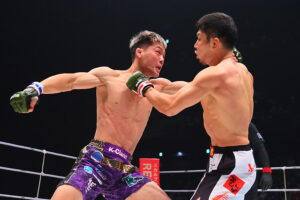 Ushiku landed an inside low kick and and jumped guard. He was looking for a triangle choke but the round ended before he could sink it in.

Ushiku caught Saito’s groin with a glancing low kick at the start of the second and the referee paused the fight to give the champion time to recover. The champion looked to throw a straight right to the body followed by a left hook upstairs but neither landed flush.

The action slowed as they clinched in the corner but the referee stepped in to separate them with just over a minute remaining in the round. Ushiku attacked with a flying knee as Saito appeared to be changing levels. It wasn’t immediately obvious how much damage had been done as both men returned to the clinch. But blood was pouring freely from Saito’s face and the referee called for the doctor.

Slow motion replays showed that Ushiku’s knee had connected clean with the bridge of Saito’s nose. It was a beautifully executed strike and, after an extensive delay, it became clear that the fight was over.

With the win Ushiku improves to 20-8 and becomes the new Rizin featherweight champion. Saito, who was extremely unhappy with the stoppage, drops to 20-5. 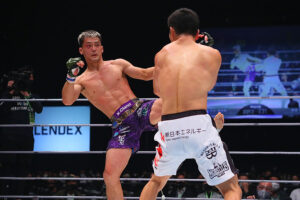 There was a major upset in the c0-main event too. Promotional newcomer Saori Oshima (7-2) beat super atomweight tournament winner Kanna Asakura (18-6) by split decision and could well have earned herself a title shot. 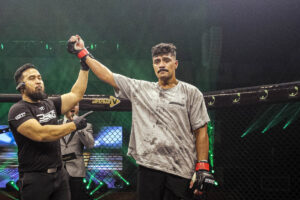