ONE welterweight champion Zebaztian Kadestam made the first successful defense of his title on Friday in Myanmar after rendering Georgiy Kichigin unable to continue in the main event at ONE: ‘Reign of Valor’.

It appeared that Kadestam had a serious fight on his hands after Kichigan came out and immediately planted the Swede on the mat with a takedown in the opening round.

Wrestling has always been Kadestamâ€™s Achillesâ€™ heel but he continued to fight his way back to the feet while Kichigan was constantly pressing forward to look for the takedowns. When he did stay on his feet, Kadestam looked to punish the Kazakhstan native with every strike he threw but he still struggled to keep Kichigan from finding a way inside to drag him back down to the mat.

Still, Kadestam showed great patience and good conditioning as he countered Kichigan on every occasion where he was able to swoop inside and then start trying to get him down on the canvas.

The second round saw a similar start as the first with Kichigan desperate for the takedowns and Kadestam doing everything possible to stop him.

The momentum in the fight shifted rather dramatically when Kichigan got locked up in the clinch with Kadestam during one of his takedown attempts towards the end of the second stanza. With Kichigan trying to preserve his body lock, he failed to see Kadestam load up on a huge left elbow strike that landed with brutal force. As soon as the elbow and forearm connected, Kichigan slumped down showing the ill effects of the strike he just absorbed.

The round ended and both fighters made it back to their corners but when the one minute rest period was up, Kichigan (20-6) couldnâ€™t get up from his stool and the referee had no choice but to stop the contest. The official time was 5:00 in the second round as Kadestam (12-4) gets the win by TKO and he holds onto the ONE welterweight championship.

In heavyweight action on the card, former Cage Warriors champion Mauro Cerilli got his first win in ONE Championship in somewhat bizarre fashion with a knockout against Alain Ngalani.

Immediately after the fight started, Cerilli put Ngalani down to negate his powerful striking attack but he was constantly working to keep the fight on the ground. Ngalani tried to explode up from the bottom but each time he found himself trapped under Cerilliâ€™s grappling attack.

When Ngalani did manage to sprawl out in an attempt to get back to his feet, Cerilli countered with a pair of devastating knee strikes that brought the contest to an end. At first it appeared that Cerilli had blasted him with illegal shots behind the head and it was clear that Ngalani was already done.

While it was a confusing situation, Cerilli (13-3) was finally handed the win after it was deemed that no fouls were committed with the knees landing to the side of the head and since Ngalani (4-5-0-1) couldnâ€™t continue, the Italian was declared the victor by way of knockout. 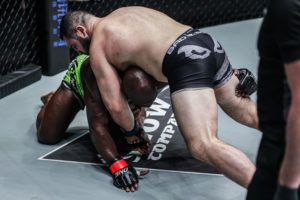 Arguably the most improved fighter on the entire ONE Championship roster, Rene Catalan picked up the biggest win of his career with a first round stoppage against former strawweight champion Yoshitaka Naito.

It was obvious from the opening seconds that Naito wanted to get this fight to the ground but Catalan was having none of it.

The Filipino stuffed the early takedown attempt from Naito and then began blasting away at him with hammer fists and punches as blood started pouring from the Japanese fighterâ€™s face. Catalan just continued the assault with Naito not able to do much of anything except hold onto a leg and hope he could make it to the end of the round.

The assault was just too much for Naito (13-3) and following several unanswered blows the referee stopped the contest with Catalan (6-2) earning his sixth win in a row overall and potentially securing himself a title shot later this year. Canadian Indian Gurdarshan Mangat had a lot of hype surrounding his first appearance in ONE Championship while being touted as the best pound-for-pound fighter from his home country.

Mangat showed no signs of nerves despite the pressure weighing on his shoulders as he put on a striking display against Finnish grappler Toni Tauru.

While it wasnâ€™t the most exciting display through the first two rounds, Mangat was just chopping away at Tauruâ€™s lead legs and then occasionally going to the body or head with his kicks.

Despite likely being up two rounds, Mangat wasnâ€™t going to be satisfied with a decision so he came out guns blazing in the third determined to get the finish.

After landing a crushing left hand straight down the middle that put Tauru on wobbly legs, Mangat found his opening. He eventually trapped Tauru against the cage and uncorked a huge knee strike that crumpled the former bantamweight and sent him down to the canvas once and for all.

The knockout win moves Mangat to 14-2 in his career as another flyweight contender joins the ONE Championship ranks. Tauru drops to 11-7 after suffering his third straight ONE Championship defeat. 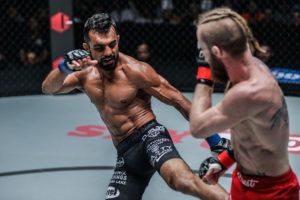 In the opening MMA fight on the main card, Tial Thang made a successful fighting debut in front of a home Myanmar audience with a strong showing against Rin Saroth.

It was a showcase for Thang (1-0), who has been a longtime student of ONE two-division champion Aung La N Sang, and he managed to come out with a unanimous decision victory in his first professional fight. Saroth drops to 3-7. In the co-main event, Phoe Thaw bounced back from the first loss of his career with a first round TKO against Indonesiaâ€™s Yohan Mulia Legowo.

The Myanmar native had to survive a couple of scares on the ground, which was exactly what cost him in his last fight against Keanu Subba. This time around, Phoe Thaw was able to stay patient in the face of constant submission threats before scrambling free from Legowoâ€™s grasp.

Once he broke free, Thaw (7-1) decided to keep the Indonesian on the ground where he used his considerable reach advantage to rain down punches from the top. Eventually, Legowo (8-8) withered from the barrage of punches that kept finding a home on his chin and the referee opted to stop the contest with just seconds remaining in the opening round.