New Zealand’s very own Kai Kara-France needs no formal introduction to fight fans in China as he makes his octagon return on the undercard of UFC Fight Night 157 this Saturday.

Prior to inking a multi-fight deal with the UFC in June 2018, Kara-France was already a household name in both the Asian and Oceanic MMA scenes, competing in different fight promotions such as Pacific Xtreme Combat, MIMMA, Legend FC, Kunlun Fight and PRO Fighting.

A well-traveled athlete in the sport, one of the primary destinations in his itinerary at that time was China, where he won four out of six bouts. The last was in November 2017 when he defeated current ONE Hero Series competitor Huoyixibai via unanimous decision under the Wu Lin Feng banner.

The 26-year-old, who faces Mark De La Rosa tomorrow, feels glad to be back in China,

“I’ve been here many times, and it’s always great to be back. I am comfortable fighting in this country. And yeah, I am so excited to be here. I hope I can give the fans a great performance this Saturday,” he said.

Fresh from a split decision victory against #15-ranked flyweight Raulian Paiva in February the New Zealander wants to put on a big performance for the Chinese fans,

“I know the style of fights the Chinese people like. It’s that stand-up, high-intensity, action-packed style, and if you see my track record, that’s my style. They want action, and they appreciate it.” 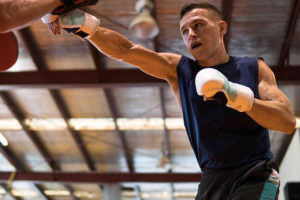 Having fought on some fairly obscure promotions in Asia he is well aware that this is his moment in the spotlight. Kara-France is determined to prove he deserves his long awaited spot on the UFC roster,

“Definitely, there is pressure to perform and to be at my best. But I am turning into motivation and inspiration as I enter this match this weekend,” he said.

Prior to signing with the UFC, 12 out of Kara-France’s 17 wins had come inside the distance. His last two bouts have both been left in the hands of the judges at octagon side and it is a streak the Kiwi is hoping to snap,

“Hopefully, we’ll get a finish this time—I said that in my last fight. If it all goes to plan, I will get the finish. I’m feeling confident for this,” he said.

Kara-France’s name already appears on the UFC rankings and he already has his sights set on the upper echelons of the bantamweight division,

“I am at No. 10 in the rankings now. If I want to move up, I need to persevere and exert every effort to get the win in impressive fashion. The end goal is to be the champion, so I am taking it one fight at a time,” he said. 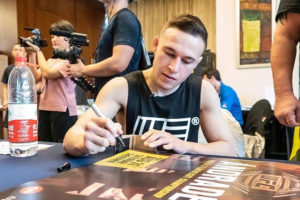 However he expects De La Rosa to provide a stern test on Saturday night,

“I’m not going to rush anything. I’m just going to feel it out and see what Mark wants to do and go from there. I’m ready to go wherever this fight goes. My cardio’s where it should be, so once I see an opening I’m going to keep the pressure on until I break him,” Kara-France said.

Back to back decision wins have earned him a spot in the rankings. But Kara-France feels he has yet to fight to his full potential in front of UFC fans and is hoping that will change in Shenzhen,

“I feel like I’m going to bring the best Kai that the UFC has seen yet. I’m just getting warmed up,” he assured.