Kairat Akhmetov, the #3 ranked flyweight, met Dae Hwan Kim in a catchweight fight at ONE: ‘Collision Course’ Part II’ The event took place at the Singapore Indoor Stadium and was broadcast this evening with the Kazakh claiming a clear cut decision win over the Korean.

Akhmetov is known for his takedowns but was in no hurry to get the fight down. A right hook followed by a left straight from the Kazakh southpaw connected clean in the opening round and he repeatedly looked to land high kicks.

When Kim did counter with a body kick of his own Akhmetov caught it and took him down. Another head kick landed at the start of the second and, although it was partially blocked, it did enough damage to open up a cut on the Korean’s face. 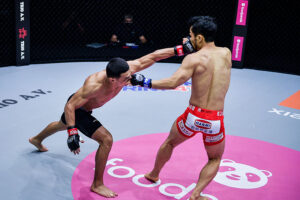 The action would end up being paused twice for doctors to take a look at it, with the action being allowed to continue on both occasions. The second interruption came towards the end of the final round, with Kim already on his back after another takedown from Akhmetov.

The Korean had no answer for the offence of the former flyweight champion. Akhmetov totally outwitted him by combining kicks, punches and takedowns leaving the judges a very easy decision.

All three awarded the fight to Akhmetov who moves up to 27-2, although it remains to be seen whether or not winning this catchweight fight will move him up the flyweight rankings. Kim drops to 15-7 and it will be back to the drawing board for the Korean after a very one sided fight. 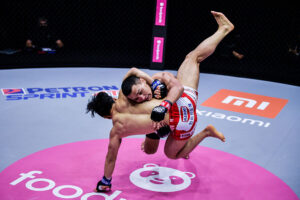 Singapore’s Amir Khan was competing just days after the death of his father. He went up against Dae Sung Park and looked very sharp in the early exchanges, landing some hard kicks to his opponent’s body.

The Korean was able to secure several takedowns although he never did any real damage. It left the judges with a dilemma and two of the three voted for Park who moves up to 11-2 while Khan drops to 13-8.

The judges weren’t required in the welterweight fight between Raimond Magomedaliev (6-1) and Edson Marques (9-1). A right hand from the Russian midway through the opening round put an emphatic end to the Brazilian’s undefeated record. 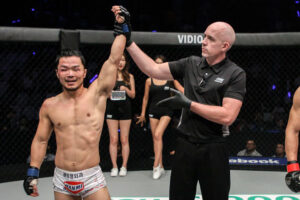