Kana Watanabe is heading into arguably the biggest fight of her career when she takes on Liz Carmouche at Bellator 261 on Friday night (local time). The 32 year old faces Liz Carmouche at the Mohegan Sun Arena in Uncasville.

Having flourished in her native Japan with promotions like Rizin and Deep Jewels, the undefeated star signed with Bellator in 2020 with a view to taking on tougher challenges. There are not many elite flyweights in Asia, and Watanabe has already proven that she can hang with the best in the division.

In Carmouche, she faces in opponent who fought for a world title in Strikeforce as well as competing for the strap in two different weight classes in the UFC. But Watanabe believes she can secure victory and potentially earn a title shot in the process,

“I don’t really see any holes in her game. (But) I’m very confident in my skillset to get a win in this match. I think that if I have a positive showing this Friday that I should be deserving of an opportunity (for the title.) This is a very important fight because of the title implications on the outcome of this fight,” she added. Carmouche’s second crack at a world title came at UFC 157. In what was the first-ever women’s MMA fight in the UFC, she faced Ronda Rousey for the inaugural women’s bantamweight belt but lost via armbar in the first round.

Rousey’s is a name that’s been mentioned a few times during fight week. Primarily, because Carmouche has been training with Justin Flores, who used to coach the hall-of-famer.

Due to her background in judo, Watanabe has often drawn comparisons with Rousey, but suggests that any links between their respective styles are probably wide of the mark.

“I’m very flattered by the comparison to Ronda Rousey but just fundamentally, from everything to the ground game, to throwing to all techniques it’s very much different in terms of my judo,” said Watanabe.

Watanabe’s first-ever fight on US soil came against Alejandra Lara at Bellator 255 in April. It was a robust test for the 32-year-old against an opponent who’s challenged for the title twice. Watanabe did just enough to win the fight and was awarded the split decision.

“I actually agree it was a close decision and I very much accept how it turned out (the split decision),” she said.

The stage is set, and It’s set to be an important few weeks for the division. The champion, Juliana Velasquez will defend her title for the first time against Denise Kielholtz at Bellator 262 in July.

Watanabe does not see the belt changing hands that night but is hoping she will earn the opportunity to face the winner in a title fight,

“I’m pretty confident that Juliana is going to win that fight and I’m looking forward to seeing her soon after that.” 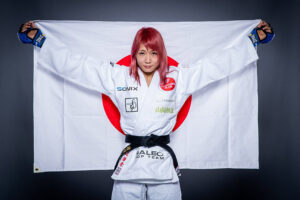