Kazuki Kasai is beginning to build up an impressive head of steam. He’s 25 years old and riding a four-fight winning streak. Four of his six wins have come via stoppage. This weekend, the Mach Dojo man will be hunting for another finish at Pancrase 323 when he takes on Genpei Hayashi.

“I’ve moved up to lightweight and I’m fighting in good condition. I’m also feeling stronger, so I do feel like I’m on a roll,” he said.

He is improving in all areas but Kasai knows what his greatest strength is,

“I’m confident no one can beat my wrestling. My striking is steadily improving, I’ve got good Muay Thai, boxing, and grappling coaches. I really feel I’m getting stronger overall, so my task is to use everything in my fights,” he added. 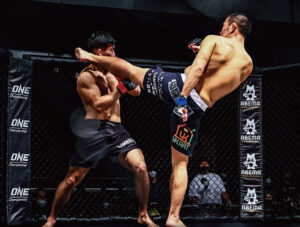 His opponent fought for the vacant lightweight title at Pancrase 318 but suffered a first round knockout. He’s also lost five of his last seven bouts.

“I don’t know if it’ll be in the same way, but whether it’s striking or grappling, I’ll be looking for the finish. I think I can beat him with my strengths on the striking side, and I’m sure my wrestling is better than his.”

He does have respect for his opponent’s strength both on the mental and physical side,

“Hayashi is strong, and he has great willpower, so it will definitely not be an easy match. It’s going to be a tough fight, but I know that, so I’m pushing myself every day. I’ve been able to overcome hard training and not lose to myself. On the feet or on the ground I’ve got the edge. I believe in myself, and I can win,” he continued. 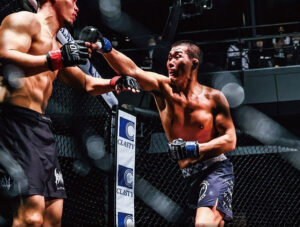 A fourth consecutive win for Kasia would certainly put him in title contention, but in terms of a potential hit list – the Aomori-born fighter is not bothered who stands in front on him.

“Whoever they give me I’ll take them one by one. I definitely think I’m better in all areas, and I’m training to use my best points against each opponent. I can beat whoever they put in front of me,” he said.

Kasia’s last fight came against Takuya Nagata at Road to ONE 7 in February and it was a challenge he clearly relished as he beat the 27-year-old so badly his corner threw in the towel,

“The offer for that fight came three weeks before the show, but it was at lightweight and I was in fight shape at the time, so I took it. My MMA, Muay Thai, grappling and jiu jitsu skills have all improved, so I was ready to fight on short notice. Nagata has experience abroad, so being able to fight him was a big for me,” said Kasia.

In terms of his ambitions Kasia is very clear. He doesn’t mind who he fights for as long as he is getting paid,

“I don’t have a goal to fight in any particular promotion, but I want to make a living from the martial arts, so I want to fight for wherever pays the most fight money.” 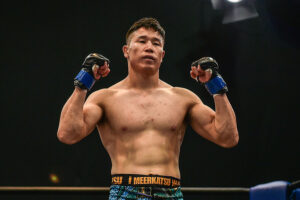 Otgonbaatar Nergui says he will knock out Rahul Raju