Tatsuya Saika predicted a first-round knockout leading into his interim lightweight title showdown with Genpei Hayashi and he delivered with one of the most crushing uppercuts in recent memory.

The main event of Pancrase 318, which took place at Studio Coast in Tokyo on Sunday evening, started off with an explosive exchange that did not allow either fighter to have a feeling out process.

Hayashi struck first with a solid left hand and then followed with an overhand right, left hook combination that had Saika wobbly for a moment. After a head kick barely missed, Hayashi dipped in for a takedown and locked into a clinch war with his opponent. They eventually got back to the center to commence with multiple hard exchanges with both fighters landing with flush shots. Saika had the upper hand since he was able to connect with knees off the break.

Without any telltale signs, Hayashi stepped into the pocket with his head down trying to initiate the clinch and paid dearly with an uppercut that flatlined him. He laid lifeless for a few minutes and when he later gained consciousness, he was taken to the back on a stretcher.

Saika (7-1) has earned himself a serious reputation by winning all his fights by first-round knockout. The newly crowned interim champ will now face off against reigning lightweight champion Takasuke Kume in a unification bout at a later date.

Hayashi (10-9-1), on the flip side, snaps his two-fight winning streak and goes to the back of the line. 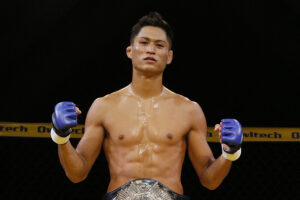 The co-main event was a title eliminator between rising veteran Taichi Nakajima and former UFC featherweight Yoshinori Horie. It was billed as a grappler versus striker matchup and it played out exactly that way with Nakajima using a heavy wrestling attack and clinch work to earn the decision on the judge’s scorecards.

Nakajima took the center and sustained a furious pace through all three rounds. Having Horie stuck against the fence and fending off takedown after takedown on top of tussling in the clinch played favorably for Nakajima.

Without  being able to drag the fight into devastating exchanges on the feet Horie was at a disadvantage since it took away his most powerful weapons. 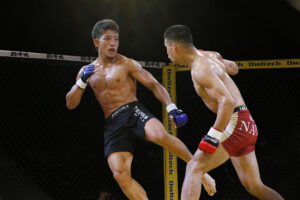 This all culminated in Nakajima taking home the split decision. In doing so he earns a shot at the lightweight title currently being held by Isao Kobayashi.

For Nakajima it was a second straight decision win which moves his record to 15-11-1. Horie loses for the first time since being released by the UFC last year and drops to 9-3.