Kenta Takizawa has signed with Rizin. The 25 year old is best known for his flying knee finish of Hayato Ishii at Pancrase 310 that won him ‘KO of the Year’ at the 2019 Asian MMA Awards.

He holds a 10-5 record and has spent the majority of his career with Pancrase. Takizawa has won nine of his 14 fights for the promotion.

In 2019 he earned a shot at the bantamweight belt but was submitted by reigning champion Rafael Silva at Pancrase 303. Takizawa enters a bantamweight division that is in flux following the injury to Kyoji Horiguchi.

Manel Kape beat Kai Asakura at Rizin 20 to become the promotion’s new 135lbs champion. Horiguchi is likely to return before the end of the year while other potential opponents for Takizawa include Shintaro Ishiwatari, Yuki Motoya, Erson Yamamoto, Hideo Tokoro, Hiromasa Ogikubo and Ulka Sasaki.

Rizin 21 is set for Shizuoka on February 22nd. There are currently no fights confirmed for the card. 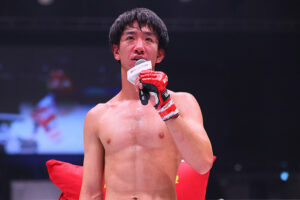