Kai Asakura is on the cusp of vying for Kyoji Horiguchi’s title after pulling off one of 2019’s biggest upset victories, but Ulka Sasaki has the opportunity to interrupt his momentum at Rizin 19.

The UFC veteran is confident of pulling off the upset this Saturday and believes Asakura made a mistake in accepting this fight when a title shot was already on the table,

“He made a mistake of taking this fight. It’s no secret that I want a shot at the title. I know he will get a title shot at the New Year’s Eve event. I want that as well. If I beat him on Saturday, that makes me the new contender for the belt,” he said through his interpreter. 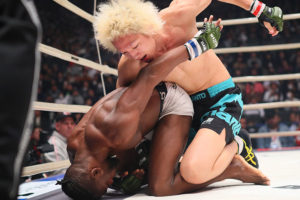 The MMA world was caught by surprise when Asakura obliterated Horiguchi by way of 68-second technical knockout in a non-title contest at Rizin 18 this past August.

That win was supposed to lead to an immediate title shot. But Rizin president Nobuyuki Sakakibara was struggling to find a major attraction for Saturday’s card and decided to match Sasaki with Asakura.

After succumbing to Shintaro Ishiwatari’s second-round north-south choke at Rizin 17 last July Sasaki hopes to redeem himself by defeating Asakura,

“It was a tough loss. I worked very hard for that bout, and I only lasted for less than two rounds with Shintaro Ishiwatari. I believe I could have done more against him, but it is what it is,” he stated. Sasaki knows there would be no better way to resurrect his Rizin career than by beating the number one contender,

“But this fight on Saturday is a great chance for me because it can put me back on the path to the title. Asakura should know that there is a consequence for taking this fight against me. I am determined to walk away with the win and the title shot,” Sasaki added.

Both men were originally penciled to square off against each other last April, but Sasaki was forced to withdraw from the match due to an injury that he sustained in training.

Sasaki sees his size and wrestling ability as being key in this matchup,

“I have my hands full in the fight against him. He is young and aggressive, but I am the more experienced fighter here. I fought the best already in different organizations. I think I’m faster, I’ve got some good scrambling, and I’m a little bit taller. I’m going to get there in and just wrestle him. I see a lot of different positions coming up that I’m going to take advantage of and come out on top.” Sasaki, who has alternated between wins and losses in his last eight fights since 2016, is known for his submission finishes of Teruto Ishihara, Roland Delorme, Willie Gates, Willie Gates and Jenel Lausa.

“I always know what I am doing. Be careful what you wish for,” he warned Asakura.

The last time Sasaki had a belt wrapped around his waist was when he outpointed Tetsu Suzuki for the Shooto Pacific Rim 132lbs championship in January 2013. The Japanese submission specialist would love nothing more than to add another belt to his collection with Rizin,

“I want to be a champion again. It has been a long time since I had a belt. A win in this match will definitely put me in line for the title. If Kai Asakura is blocking my way to earn that spot, I have to take him out. I will give everything I’ve got.”