The gulf between undefeated Russian phenom Khabib Nurmagomedov and the rest of the UFC lightweight division remains as wide as ever.

Despite coming off an 11-month layoff, ‘The Eagle’ showed no signs of weakness and dominated the fight before notching a scintillating submission win over Dustin Poirier. In the process he unified both lightweight titles at UFC 242 in Abu Dhabi.

With a partisan crowd rallying behind him and chanting his name, Nurmagomedov had his way from the get-go, effortlessly converting three takedown attempts in the very first round and stifling his American opponent with brutal ground-and-pound.

He failed to end matters right there and then with a neck crank midway through the opening round as Nurmagomedov rained down a series of vicious elbows on Poirier. The American stood back up and gave him a grin before heading to his corner.

Nurmagomedov appeared to be picking up where he left off at the start of the second frame, but he was caught by a solid right hook from the southpaw Poirier. 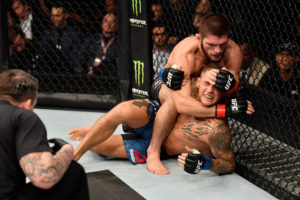 The Russian was on wobbly legs but found his footing and staved off the attack. Once Nurmagomedov regained his balance, he quickly put things in order by bringing the proceedings back to the mat.

Not giving Poirier any time or space, Nurmagomedov opened a cut on the eye of his foe as he moved in and out from dominant positions on the canvas. The American did come to life in the third round, countering a takedown attempt with a guillotine choke,

Nurmagomedov kept his composure and worked his way out before taking Poirier’s back for a rear-naked choke attempt of his own. The Russian soon switched strategy and softened his opponent up with a few punches.

An opening to grab the neck of Poirier soon materialized and he locked in a rear naked choke, squeezing with all his might to force the tap at the 2:06 mark of the third round.

With his impressive victory Nurmagomedov improves his perfect professional record to to 28-0 and extends his UFC winning streak to 12. It was also the tenth submission win of his career.

On the other hand, Poirier sees his record drop to 25-6. The defeat snapped a five-fight winning streak and leaves him stripped of his status as interim champion. 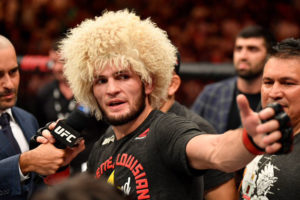 Meanwhile, heavyweight mainstay Curtis Blaydes (12-2) of the United States demolished Russia’s Shamil Abdurakhimov (20-5) within two rounds to walk away with a TKO win.